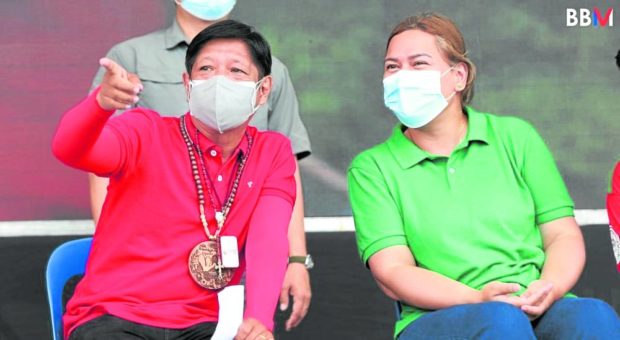 SAN PEDRO, Laguna — With the 2022 elections drawing near, national candidates make their last-ditch effort to secure as many votes as possible.

For the tandem of Ferdinand “Bongbong” Marcos Jr. and Inday Sara Duterte-Carpio, wooing voters in the country’s vote-rich regions would be the strategy during the last stretch of the campaign.

They then returned to Southern Luzon on Wednesday, with Marcos campaigning in Occidental Mindoro and Oriental Mindoro whiles Duterte-Carpio met with several sectors in Batangas.

The Southern Luzon leg for the week ended in Laguna on Thursday with a grand rally in Biñan.

In an interview with reporters following a local event in San Pedro town in Laguna, Duterte-Carpio explained this move to return to several provinces and regions that they have already visited before.

The Marcos-Duterte tandem was also scheduled to visit Bulacan province in the Central Luzon region and Taguig City in the NCR this coming weekend.

Asked if Marcos is following the same strategy as her, Duterte-Carpio said she does not know as they have different campaign teams.

This is a part of the tandem’s strategy, said Duterte-Carpio.

“That is really the strategy of the UniTeam–that we cannot be together all the time otherwise we will not be able to cover the entire Philippines,” she said in February.