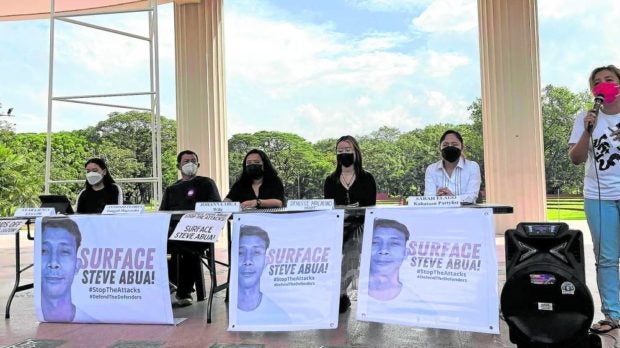 Relatives and members of various progressive groups gather at UP Diliman in Quezon City in this file photo taken during the launch of the “Surface Steve Abua Network” to find the peasant activist who was reportedly abducted while on his way to a meeting in Bataan province on Nov. 6. —PHOTO COURTESY OF KARAPATAN

MANILA, Philippines—An organization of human rights lawyers on Thursday prodded the Court of Appeals to reconsider its March 29, 2022 ruling dismissing the habeas corpus case filed by the wife of missing peasant activist Steve Abua against several officials of the military.

In a motion for reconsideration, the National Union of Peoples’ Lawyers (NUPL) maintained that a writ of habeas corpus should be issued and ordered the immediate release of Abua.

The Court of Appeals’ 12th Division, in its March ruling, said that the writ of habeas corpus cannot be issued due to the absence of proof that Abua is being restrained of his liberty.

The appeals court said the grant of relief in a habeas corpus is not based on the disappearance of a person, but on his illegal detention. The court added that habeas corpus cannot be used to obtain evidence on the whereabouts of a person, or as a means of knowing who was responsible for his abduction.

Abua, a peasant advocate and organizer of Kilusang Magbubukid ng Pilipinas in Central Luzon, was last seen in a commercial area in Barangay Sta. Cruz in Lubao Pampanga on November 6, 2021. He was supposed to meet a certain Lester Advincula who also went missing.

His family only learned that he was missing a day after receiving text messages, calls, and a video call where Abua was seen blindfolded. The messages to his family tell them that Abua should “return to the fold” and cooperate with the government.

Based on the text messages, Abua was deprived of his liberty because belongs to a “different government.” But the message told his family that they are giving Abua a second chance.

Meanwhile, on December 29, 2021, a report from Kalinaw News mentions rebels returning to the fold including Advincula.

NUPL said “the surfacing of Advincula as a “surrenderree” months after they went missing bolsters the fact that Abua, as evidenced by messages and video calls from his captors, was arrested and detained by either the police or the military.”

“This can also be gathered from Abua’s experience of surveillance from suspected military elements prior to his disappearance. At the same time, his organization has also been relentlessly red-tagged as a ‘communist terrorist group,” read the motion.

“Petitioner humbly invites the Honorable Court to closely reconsider its view of the overall circumstances surrounding the abduction and continued involuntary disappearance of her husband since November 2021 and grant the writ and privilege of habeas corpus as prayed for,” the  NUPL said in its motion for reconsideration.

The lawyers’ organization added that while there is no direct evidence of Abua’s illegal confinement under the custody of the police or the military, “the facts established by petitioner constitute more than a scintilla of evidence or substantial evidence.”

Meanwhile, human rights group Karapatan said every day without any news about Abua is torture to his family.

“It has been 166 days since Steve Abua was abducted — and every single day that he remains missing is a merciless form of torture for his family. The circumstances of his abduction clearly point to the military as the perpetrators of this abduction, and we plead on the Court of Appeals: help us surface Steve and issue the writ of habeas corpus now,” Karapatan Secretary General Cristina Palabay stated.

Palabay said “not only was Steve abducted: he was clearly tortured, and the threats sent to Johanna red-tagging Steve evidently indicate that his abductors are State forces, or at the very least working for them as part of counterinsurgency operations. Despite laws penalizing the perpetrators of torture and enforced disappearances, they continue to use the same tactics with impunity.”