Robredo: Let’s not dwell on Isko rant; polls bigger than two of us 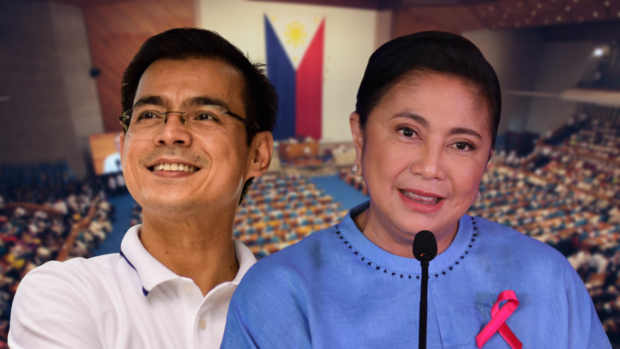 MANILA, Philippines — Vice President Leni Robredo refused to engage Manila Mayor Francisco “Isko Moreno” Domagoso’s recent rants, stressing on Thursday that the 2022 national elections is not only about the two of them as it is a national concern.

Robredo during an ambush interview on the sidelines of her rally at Bogo City in Cebu was asked to react to Moreno’s call for her to withdraw from the presidential race, and to the local chief executive’s recent rants about spokesperson Barry Gutierrez supposedly always speaking for the Vice President.

According to her, the election is a bigger fight than two candidates exchanging tirades.

(Again, for me, I’d rather not engage in an exchange with him, because this is not a simple fight between the two of us. This is a fight for the country, we are facing a bigger battle which we need to win.)

(As I have said earlier, this election is extraordinary, it is not only a contest of candidates but one that would determine what kind of governance and politics would prevail in the country for the next six years — that’s what we’re fighting for today.)

Rather than spending time engaging Moreno, Robredo said that she would prefer to focus on the campaign given that the election day is just less than two weeks away.

(And we are encouraging everyone to join us in this fight. We would not be spending time quarreling with other candidates because this fight is more than all of us combined.)

In a press conference last Easter Sunday, three presidential bets in Moreno, Senator Panfilo Lacson, and former Defense secretary Norberto Gonzales gathered to reiterate their stance against any of them withdrawing.  This was after people from Robredo’s camp supposedly approached them to ask them to withdraw from the presidential race.

But in a surprising turn of events, Moreno also called on Robredo to make the ‘supreme sacrifice’ of withdrawing, saying that it would give other candidates a bigger chance to defeat survey frontrunner former senator Bongbong Marcos.

READ: Moreno calls on Robredo to withdraw from presidential race

All of the national candidates who attended the press conference eventually disagreed with Moreno, who admitted that he went off the script in asking Robredo to withdraw.  This included Moreno’s running mate, physician Willie Ong.

READ: ‘Taste of their own medicine’: Isko Moreno doubles down on pushing Robredo’s withdrawal

While other candidates clarified their stance on calls for Robredo to back down from the presidential race, Moreno doubled down on his call, even claiming that the surveys where Robredo is second behind Marcos are “polluted”.

He then criticized Gutierrez for speaking on behalf of Robredo, egging the Vice President to deny the claims that she asked other candidates to withdraw.  Gutierrez gave a simple response on Wednesday — “K” — opting to discuss the shooting incident that marred labor leader Leody de Guzman’s meeting in Bukidnon.

READ: VP spox to Isko Moreno after mayor asks him to stop speaking for Robredo: ‘K’

Pulse Asia’s recent survey showed Moreno, which has an eight percent voter share, behind second-placer Robredo whose voter share score increased by nine percentage points.  Marcos still holds a commanding lead, even if he suffered a four-percentage point decrease — from 60 percent to 56 percent.