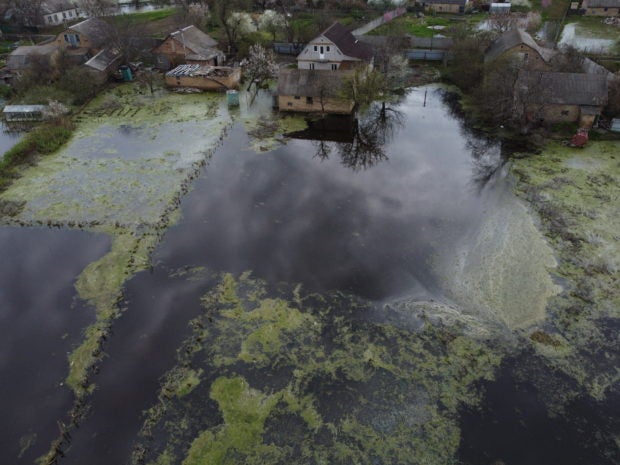 Homes are surrounded by flood waters in the small Ukrainian town of Demydiv on April 30, 2022. – In addition to the devastation and death caused by Russian missiles, the invasion has also caused flooding in Demydiv village after a Russian strike on a nearby dam. AFP

DEMYDIV, Ukraine—When the flood hit, Maria Didovets couldn’t open the door to leave her house near Kyiv because it would have let in more water, so the 82-year-old had to climb out of a window.

In addition to the devastation and death caused by Russian missiles, the invasion has also caused flooding in Demydiv village after a Russian strike on a nearby dam.

“The water rushed in. We’ve been struggling so much,” said Didovets who was wearing wellington boots and standing in ankle-deep water in front of her home whose cellar is still flooded.

Pumps hummed as they sucked away the water that surged into the basements of dozens of homes, a key place for storing canned food in many Ukrainian households — yet knee-deep water remained in some places.

The Russian strike hit the dam and a hydroelectric facility at the end of February, sending a deluge of water coursing from Kyiv’s reservoir into parts of Demydiv, village leader Oleksandr Melnychenko told AFP.

When Russian troops began their push in late February to capture Kyiv, Demydiv — a settlement of closely-nestled rows of small houses with gardens — found itself in the heart of the war.

To block the Russian advance, Ukraine’s army blew up the bridge near the village that crosses the Irpin River as they did in other places near Kyiv.

The road that passes through Demydiv and across that bridge heads straight toward central Kyiv — it’s about an hour’s drive to the presidential palace.

Unable to cross, the invaders turned in another direction, with Melnychenko saying they ended up going toward Bucha, the town now synonymous with war crimes allegations involving Russian soldiers.

“If we hadn’t done this… the Russians would have been shooting from inside Kyiv,” he said, explaining it stopped them from reaching two more villages on the road to the capital.

As well as blasting the bridge, authorities had also opened the dam, raising the river level by about 30 centimetres (one foot) and making it too wide for the Russians to cross using a portable pontoon bridge, he said.

‘Neither tanks, nor flooding’

But the flooding hit later when a projectile hit the dam on February 27, raising the water by many metres near the village.

Were it not for a levee around the edge of Demydiv, the rush of reservoir water would likely have caused far worse damage.

Although the flood water never actually breached the levee, residents said it seeped up from out of the ground.

At the levee itself, flotsam composed of sticks and plastic bottles appeared to show a high-water mark well below the barrier’s crest.

About 60 of the village’s 750 households were affected by flooding — far fewer than than the 200 or so damaged or destroyed during the fighting.

But two months on, efforts to pump out the water are still under way.

Getting rid of all the water and drying out the homes looks to be weeks away from being completed — but the vast plain that took most of the water is clearly a long way from ever being dry again.

However, engineers have already restored enough of the bridge crossing the Irpin River that cars were driving on it again on Saturday.

Construction crews in other areas near Kyiv have also have built smaller bridges with metal beams running parallel to their larger, but blast-destroyed counterparts.

In some areas north of the capital, drivers can be seen gingerly inching their vehicles onto temporary metal pontoon bridges that bob in the water under the weight of crossing cars.

But the war and its impact has left Didovets, the elderly resident whose home is still flooded, angry and exhausted.

“No tanks and no flooding,” she said firmly.

Read Next
War in Ukraine: Latest developments
EDITORS' PICK
Authors unbowed after gov’t ‘purge’ of books
Powered by style, innovation and passion
‘FPJ’s Ang Probinsyano’ officially ends after nearly 7 years
House energy committee chair Arroyo bats for cheap electricity
A laptop that maximizes your WiFi so you can maximize your productivity
Red-tagged green activist recalls imprisonment
MOST READ
Arjo Atayde reveals proposal to Maine Mendoza was ‘more than a year’ in the making
Man, girlfriend found dead in Leyte river
Jalen Green has no doubt Kai Sotto will make the NBA
Authors unbowed after gov’t ‘purge’ of books
Don't miss out on the latest news and information.