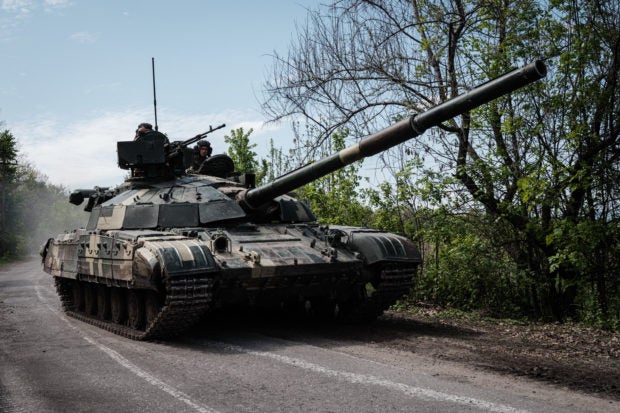 A Ukrainian main battle tank drives on a road near Sviatohirsk, eastern Ukraine, on April 30, 2022, amid the Russian invasion of Ukraine. AFP

A Russian missile destroys the runway at Odessa airport in southern Ukraine but there are no victims, the regional governor Maxim Marchenko says on his Telegram account.

A group of 20 civilians are leaving the Azovstal steelworks, where the last Ukrainian troops are holed up in the Black Sea port of Mariupol, the soldiers there say.

Fourteen Ukrainians including a pregnant soldier have been freed in the latest prisoner exchange with Russian forces, Ukraine says, without revealing the number of Russians returned to Moscow.

The bodies of three men shot in the head and with their hands tied have been found in a pit near Bucha, a town close to Kyiv, police say.

There were also traces of torture, says the statement. Bucha has become synonymous with allegations of Russian war crimes since dozens of bodies were first discovered there in early April.

The German government will consider withdrawing perks given to ex-chancellor Gerhard Schroeder because of his close ties to Russian President Vladimir Putin, Germany’s finance minister says.

More than 5.4 million Ukrainians have fled their country since Russia invaded two months ago, with tens of thousands joining their ranks every day, the United Nations says.

Beyond the refugees, the International Organization for Migration (IOM) estimates more than 7.7 million people have been displaced within Ukraine, meaning that more than 13 million people overall have been uprooted by the conflict.

Hollywood star Angelina Jolie makes a surprise appearance in the western Ukrainian city of Lviv where she meets displaced people.

Jolie is a UNHCR special envoy, but it was not known if she was visiting the country in that capacity.