Prisoner swaps: A throwback to the Cold War | Inquirer News 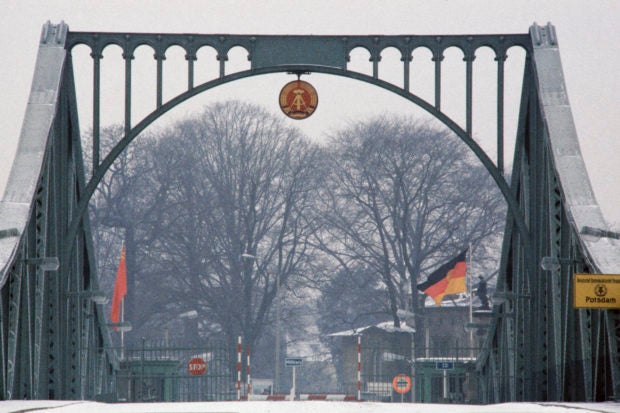 Picture taken on February 07, 1986 of the Glienicke bridge, or Brücke der Einheit, which was used by the Soviet Union and the United States to exchange captured spies during the Cold War. AFP

PARIS—The prisoner exchange on Wednesday between Moscow and Washington, at the height of the Ukraine war, is reminiscent of swaps carried out between East and West during the Cold War.

It also bears the hallmark of a historic spy swap in 2010 in Vienna.

Russia exchanged former US marine Trevor Reed, jailed for nine years for assaulting police, for Russian pilot Konstantin Yaroshenko, who was convicted of drug smuggling in 2010 in the United States.

According to Reed’s father the swap took place in Turkey.

Before the end of the Cold War in 1991, prisoner swaps were a regular occurrence between Moscow and the West, but they mainly involved spies.

They have since become rarer, but have still continued since Russia’s Vladimir Putin came to power in 2000.

On July 9, 2010, Russia and the United States carried out their biggest spy swap since the fall of the Iron Curtain at Vienna airport, exchanging 10 agents deported by the US for four freed by Moscow.

In the highly choreographed cloak-and-dagger operation, special Russian and US flights carried the spies to Vienna, parked next to each other on the runway, then took off within 15 minutes of each other after the exchange by shuttle bus.

A government jet flew the 10 Russian spies, including the glamorous Anna Chapman, back to Moscow’s Domodedovo airport.

The four released by Russia included three convicted of spying for the West.

Among them was Sergei Skripal, a former colonel with Russian military intelligence whose 2018 poisoning in southern England, where he had taken refuge, sparked a major diplomatic crisis between Russia and the West.

Several Western countries have accused Moscow of being behind the assassination attempt of the former double agent, something that Moscow has always denied.

The Bridge of Spies

During the Cold War prisoner exchanges regularly took place on the iron Glienicke Bridge which linked West Berlin with Soviet-controlled Potsdam over the Havel river.

Abel — who had been sentenced by the United States to 30 years in prison — was exchanged for Powers, who was captured by the USSR after his plane was shot down in Soviet airspace.

Director Steven Spielberg turned their story into a blockbuster, “Bridge of Spies”, in 2015.

The most spectacular swap on the bridge, however, took place on February 11, 1986 when Natan Sharansky, a Soviet-born Israeli politician, was exchanged after spending years in a Soviet Gulag accused of spying and treason for seeking permission to move to Israel.