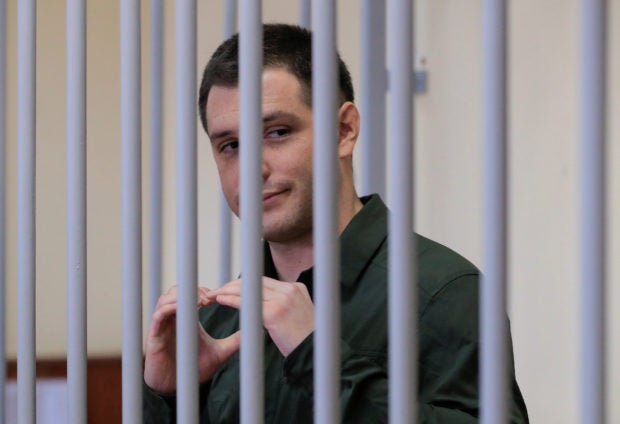 U.S. ex-Marine Trevor Reed, who was detained in 2019 and accused of assaulting police officers, gestures inside a defendants’ cage during a court hearing in Moscow, Russia March 11, 2020. (REUTERS)

WASHINGTON  – The United States and Russia swapped prisoners on Wednesday amid their most tense relations in decades over the war in Ukraine, with former U.S. Marine Trevor Reed released in exchange for Russian pilot Konstantin Yaroshenko.

The swap was not part of broader diplomatic talks and did not represent an American change in approach on Ukraine, U.S. officials said. Russian-American ties have been at their worst since the Cold War era following Russia’s Feb. 24 invasion of Ukraine and subsequent Western sanctions imposed on Moscow.

Reed, from Texas, was on his way to be reunited with his family in the United States, senior Biden administration officials said, and the 30-year-old was in “good spirits.”

“Today, we welcome home Trevor Reed and celebrate his return to the family that missed him dearly,” President Joe Biden said in a statement, noting their concerns about their son’s health.

“The negotiations that allowed us to bring Trevor home required difficult decisions that I do not take lightly,” Biden added.

Asked later on Wednesday how he was able to raise the issue of Reed’s detention amid the broader tensions with Russia over Ukraine, Biden said, “I did it. I raised it. I raised it three months ago.”

Reed was convicted in Russia in 2019 of endangering the lives of two police officers while drunk on a visit to Moscow. The United States called his trial a “theater of the absurd.”

U.S. officials said Biden commuted the sentence of Yaroshenko, a Russian pilot who was arrested by American special forces in Liberia in 2010 and convicted for conspiracy to smuggle cocaine into the United States. Russia had proposed a prisoner swap for Yaroshenko in July 2019 in exchange for the release of any American.

The swap occurred in Turkey, and the United States thanked its NATO ally for its help in the exchange. Russian news agencies reported Yaroshenko then flew from Ankara to Sochi and finally Moscow. Rossiya 1, Russia’s main national news channel, showed video of Yaroshenko being embraced by his wife and his daughter, who was jumping up and down with joy, on the tarmac at a Moscow airport.

Biden and Secretary of State Antony Blinken said they were working to free another American held in Russia, Paul Whelan, also a former Marine.

Joey and Paula Reed, the freed American’s parents, thanked Biden and others, saying “our family has been living a nightmare” for the past 985 days.

“The president’s action may have saved Trevor’s life,” they said in a statement.

Russian state television video, played on CNN, showed Reed, appearing thin and wearing a dark overcoat, being supported on both sides by men wearing camouflage. Russia state media described the video as showing Reed at an airport in Russia.

“He looks terrible to us. As his parents, we know he does not look well,” Paula Reed told CNN outside their home in Granbury, Texas.

The Reeds said they hoped to see their son as early as Thursday.

Biden met with Reed’s parents on March 30. The following week, the parents said a prisoner swap seemed to be the only way to bring Reed home and urged the White House to take all possible steps.

“The American plane pulled up next to the Russian plane, and they walked both prisoners like you see in the movies,” Joey Reed told CNN.

The months of tense diplomacy that led to Reed’s release focused strictly on securing his freedom and were not the beginnings of discussions on other issues, senior Biden administration officials said. Russian Foreign Ministry spokesperson Maria Zakharova said the swap followed a lengthy negotiation process.

Russian news agencies reported on April 4 that Reed had ended a hunger strike and was being treated in his prison’s medical center. The prison service said Reed had gone on hunger strike on March 28 to protest disciplinary action against him.

Reed’s parents said at the time he had been exposed to an inmate with active tuberculosis in December. The prison service said Reed had repeatedly tested negative for tuberculosis.

The Reeds said their son would tell his story when ready.

“We’d respectfully ask for some privacy while we address the myriad of health issues brought on by the squalid conditions he was subjected to in his Russian gulag,” they said.

Biden said his administration will continue to work for the release of Whelan and others. Whelan has been held on spying charges that he denies and that he has likened to a political kidnapping.

Whelan’s family said they worried that the deal made with Russia on Yaroshenko dimmed prospects for Whelan’s release.

“Is President Biden’s failure to bring Paul home an admission that some cases are too hard to solve?” they asked in a statement. “Who gets saved is the president’s choice.”

U.S. basketball star Brittney Griner, a two-time Olympic gold medalist, was detained at a Moscow airport on Feb. 17 when a search of her luggage allegedly revealed multiple cannabis oil vape cartridges. She faces up to 10 years in prison.