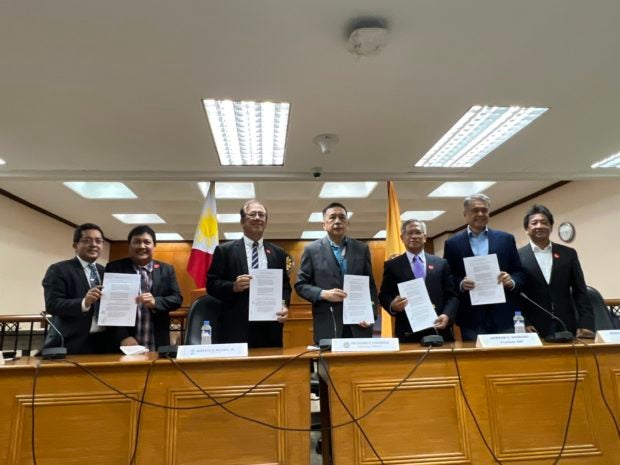 Officials of the Commission on Elections and the Kapisanan ng mga Brodkaster ng Pilipinas sign a memorandum of agreement on April 28, at the Palacio del Gobernador in Intramuros, Manila City for the PiliPinas Forum. Photo courtesy of the Office of Chair Saidamen Pangarungan

MANILA, Philippines — The Commission on Elections (Comelec) and the Kapisanan ng mga Brodkaster ng Pilipinas (KBP) teamed up for the holding of the PiliPinas Forum.

Comelec and KBP signed a memorandum of agreement on Thursday at the Palacio del Gobernador in Intramuros, Manila City.

“We are especially grateful to the KBP, who agreed to facilitate the taped Presidential Interviews at no cost to the Comelec. You are truly representative of a free and responsible broadcast media,” poll body chair Saidamen Pangarungan said during the signing.

“We hope that through the hour-long interviews to be aired by the KBP, the public may be further informed of their candidates’ programs and platforms of government. The longer time would also allow our Presidential candidates to reach the voters and engage with them substantially, compared to one or two minutes in a debate,” he noted.

Presidential and vice presidential candidates may be interviewed solo or by tandem and each of them is entitled to a one-hour panel interview.

The hopefuls have the choice if they want the interview to be: live and in-person; live and via teleconference; or taped as live with no editing.

The PiliPinas Forum will be aired from May 2 to 6, from 10 a.m. to 12 p.m. The order of airing will be determined by draw lots.

The panel includes anchors from various media networks and they will be assembled to form a three-member panel for each candidate.

Based on the guidelines, the session will begin with the candidate’s eight-minute opening statement which shall include his/her answer to the question: Paano mo iaaahon ang Pilipinas sa mga hamon at krisis na hinaharap nito ngayon (How will you raise the Philippines from the challenges and crisis that if currently face)?

The first segment will discuss inflation and poverty and jobs and income, livelihood and business.

The second segment will tackle education, healthcare and COVID-19 response.

The third segment will delve into “hot button issues” such as red-tagging, press freedom, fake news, and gender issues.

(What will be your administration’s mark? How will you ensure that each Filipino’s life will be better in the six years of your leadership?)

Initially, Comelec was supposed to hold town hall debates as its concluding event of the PiliPinas Debates.

However, Impact Hub, Comelec’s debate organizer, failed to settle its unpaid bill to Sofitel, the venue of the debates.