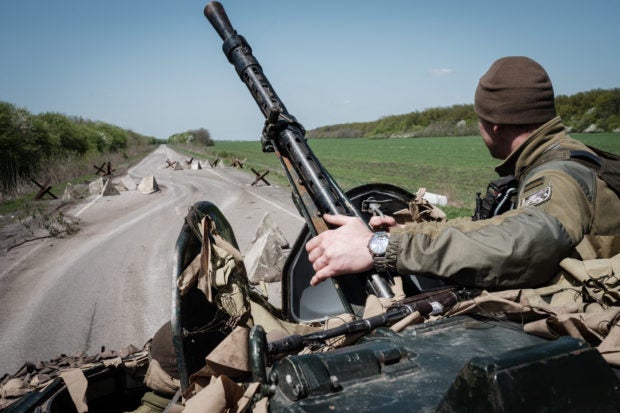 A Ukrainian soldier sits on a Armoured personnel carrier (APC) driving on a road near Sloviansk, eastern Ukraine, on April 26, 2022, amid the Russian invasion of Ukraine. AFP

Russia turns off gas to Poland and Bulgaria

Russia’s Gazprom halts gas shipments to Poland and Bulgaria for refusing to pay in rubles but the EU steps in quickly to fulfil their energy needs.

Polish Prime Minister Mateusz Morawiecki calls Russia’s move a “direct attack” on his country and assures that Poland will no longer need Russian gas from this autumn.

Bulgaria is almost completely dependent on Russia for gas.

The Kremlin blames the situation on actions taken against Russia by “unfriendly countries”, referring to Western sanctions imposed over the Ukraine invasion which have left Russia unable to use a large chunk of its foreign currency reserves.

Announcing that a workaround had been found, EU Commission President Ursula von der Leyen says: “Today, the Kremlin failed once again in its attempt to sow division among member states. The era of Russian fossil fuels in Europe is coming to an end.”

Von der Leyen warns EU members against giving in to Moscow’s demands for rubles payments, unless their contract is denominated in rubles, amid reports some customers have already done so.

“This would be a breach of the (EU) sanctions, so a high risk for the companies,” she says, adding that “about 97 percent” of all EU contracts explicitly stipulate payments in euros or dollars.

Ukraine’s Defence Minister Oleksiy Reznikov says the country has “extremely difficult weeks” ahead, warning of major “destruction” in a developing Russian offensive in the east of the country.

In a statement on Facebook he says “Russia has already gathered forces for a large-scale offensive in eastern Ukraine,” and Moscow “will try to inflict as much pain as possible”, warning of “destruction and painful casualties”.

“We will continue our work to expand humanitarian support and secure the evacuation of civilians from conflict zones. The sooner this war ends, the better — for the sake of Ukraine, Russia, and the world,” he tweets, ahead of talks with Ukraine’s President Volodymyr Zelensky.

Despite the tensions over Ukraine, Russia and the United States announce a prisoner swap, with Moscow handing over jailed ex-Marine Trevor Reed in exchange for Konstantin Yaroshenko, a pilot convicted of drug smuggling.

Russia claims its missiles have taken out a “large batch” of Western-supplied weapons and ammunition being stored at an aluminium plant in the southeastern city of Zaporizhzhia.

The US and Britain have been urging allies to send more heavy weapons to Ukraine to sway the conflict.

Pro-Russian separatists in Moldova claim shots were fired across the border from western Ukraine towards a village housing a Russian arms depot in the breakaway Transnistria region.

There are growing fears that Moscow-backed Transnistria could be drawn into the war in Ukraine.

Transnistria’s leadership has accused Ukraine of a series of attacks on state infrastructure. Kyiv has accused Russia of staging the attacks.

French energy firm TotalEnergies says it has taken a $4.1 billion charge against first-quarter earnings due to additional sanctions complicating development of its Arctic LNG 2 gas project under construction in northern Russia.

A spokesman says the writedown signals “the beginning of a retreat” from the project.