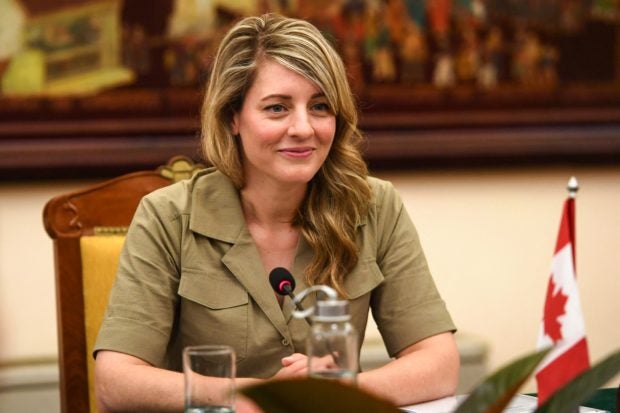 In this file photo taken on April 13, 2022 Canada’s Foreign Minister Melanie Joly takes part in a meeting with her Vietnamese counterpart Bui Thanh Son at the Government Guest House in Hanoi. AFP

OTTAWA—Canada is seeking novel powers to seize and sell off Russian oligarchs’ assets to compensate Ukraine for war damages, while announcing Wednesday sanctions against 203 people in the breakaway Donbas region.

It would become the first G7 nation to permit such asset forfeitures, and is proposing allies follow suit, Foreign Minister Melanie Joly told reporters in Ottawa.

“There was a weak link in (our) sanctions package, which was the ability for the government to be able to sell the assets that were seized and afterwards to use the profits to compensate the victims of this war against Ukraine,” she said.

The proposed changes to its sanctions regime outlined in a budget implementation bill unveiled Tuesday, she said, “will go a long way” to addressing that issue.

Parliament has started debating the measure and voting on proposed amendments. Its passage into law is assured with a small leftist party’s backing of Prime Minister Justin Trudeau’s minority Liberal government.

Seized Russian oligarchs’ assets — which local media have said top tens of millions of dollars in Canada, but officials declined to confirm — could then be used to help reconstruction in Ukraine.

Meanwhile, new sanctions targeted 11 senior officials and 192 other members of the People’s Councils of the so-called Luhansk and Donetsk People’s Republics — two regions of eastern Ukraine that declared independence with backing from Moscow.

In a statement, Joly said these individuals “are complicit in the Russian regime’s ongoing violations of Ukraine’s sovereignty and territorial integrity.”

“Canada will not stand idly by and watch President Putin and his accomplices attempt to redraw the borders of Ukraine with impunity,” she said.

The announcement brings to more than 1,100 the total number of individuals and entities in Russia, Ukraine and Belarus sanctioned by Ottawa since Moscow’s invasion of its neighbor in February.

Joly also signalled plans to reopen Canada’s embassy in Kyiv or in another Ukrainian city “in the coming days or weeks.”