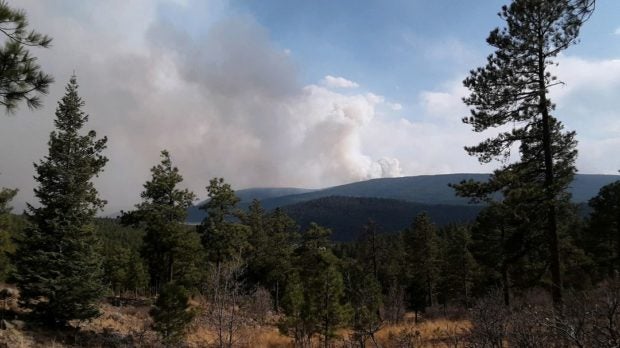 PEÑASCO, New Mexico — Paula Garcia does not know how far she will have to flee after a wildfire tore through her drought-hit mountain community in northern New Mexico.

Heaps of metal are all that are left of homes burned along the road to the village of Mora where Garcia is sheltering from a fire burning with a ferocity and speed no one can remember in these Hispanic settlements dating back to the 1800s.

The blaze is about 2 miles from Mora.

It the largest and most destructive of dozens of fires in the U.S. Southwest that scientists say are more widespread and have started earlier this year due to climate change.

Garcia said fire has turned forests and valleys northeast of Santa Fe into a “moonscape.”

“We’ve known about forest fire our whole lives, but this is on a scale that was unimaginable,” she said by phone. “We’re scared. All these villages in the north are surrounded by mountain and it’s only April. What’s going to be happening in June?”

At an evacuation center in Peñasco, 24 miles (38.6 km) northwest of Mora, locals blamed destruction from the fire on the U.S. Forest Service, which administers the areas where it began.

Logger Ricardo Fresquez said the agency prevented locals from logging and thinning trees around their villages, as they did for generations, leaving forests congested and fire prone.

“Our resources are not being utilized and are going up in smoke,” said Fresquez, whose family has lived in the Mora area for 185 years.

In recent years the Forest Service has increasingly used thinning and controlled burns to mitigate wildfire danger and has begun to partner with local villages to thin forests.

Drought-hit Mexicans assert demands that water-sharing with US ends