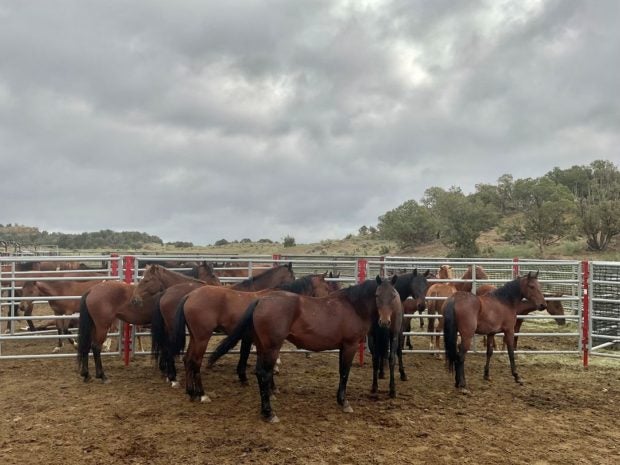 Wild horses stand in a holding area near the West Douglas Herd Area, 20 miles south of Rangely, Colorado, U.S., in this handout photo released in August 2021. Bureau of Land Management/Handout via REUTERS

DENVER — An unknown and highly contagious disease has killed 85 wild horses in less than a week at a federal corral in Colorado, officials said on Wednesday, revising the number upward from the previously announced death toll of 67.

U.S. Bureau of Land Management (BLM) spokesman Steven Hall told Reuters the entire facility holding more than 2,500 animals in Canon City, about 120 miles (190 km) southwest of Denver, is under quarantine. Animals that are sick or have been exposed to infected horses are being kept away from the healthy.

“Wild horses at the Wild Horse facility in Canon City have been infected with an unknown yet highly contagious and sometimes fatal disease,” the BLM said in a statement on Monday.

Most of the sickened horses had been transported from Rio Blanco County, near the Utah state line, in a roundup last autumn, the BLM said.

Hall said the dead animals are undergoing necropsies, and blood and tissue samples are being analyzed at two university laboratories.

“The main symptoms seem to be respiratory issues and chest congestion,” Hall said, adding that federal, state and independent veterinarians are investigating.

The wild horse and burro herds are not native to the United States but are descended from animals freed or abandoned by miners, prospectors, and others during the settlement of the American West. The BLM says the numbers, estimated at about 80,000 nationwide, must be managed because the animals foul water supplies and consume forage at the expense of native species.

The agency conducts periodic roundups, moving the animals to holding areas where some are put up for auction.

Activists say the roundups and living conditions for the corralled animals are inhumane.

“Disease outbreaks and deaths are the direct result of the BLM’s mass roundups,” Suzanne Roy, executive director of the American Wild Horse Campaign, said in a statement posted on the group’s website. “We can expect to see more suffering and death if BLM continues down this dangerous and destructive path.”