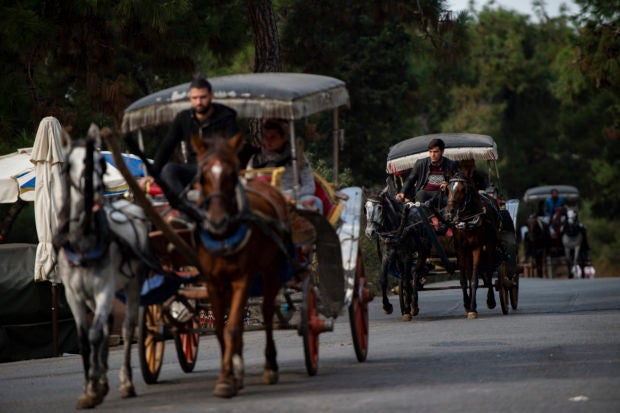 Horse-drawn carriages pass by on a street on the island of Buyukada off Istanbul on November 18, 2019. – It’s one of the classic excursions in Istanbul: a boat journey to one of the car-free Princes’ Islands followed by a ride in a horse-drawn carriage. But the carriage rides have become increasingly controversial in recent years as activists sound the alarm over the welfare of the horses. Some 400 a year are dying on the islands, a parliament committee reported in October, and activists say the real number is twice as high. (Photo by Yasin AKGUL / AFP)

Istanbul, Turkey — It has been one of the classic excursions for tourists and locals in Istanbul: a boat trip to one of the car-free Princes’ Islands followed by a ride in a horse-drawn carriage through pine forests and past elegant mansions and houses where Turkish writers lived.

But its days may be numbered after Istanbul authorities on Friday announced a three-month ban on the carriage rides following mounting alarm over the welfare of the horses.

Up to 400 are dying on the islands a year from overwork and lack of care, a parliament committee reported in October, and activists said the real number is twice as high.

Citing disease, malnutrition, and neglect, activists have called for the industry to be replaced with more humane – if less romantic – electric vehicles.

The horses are “merely seen as lifeless objects” and “no different from transport vehicles like buses,” said Elif Erturk, of the “Don’t Take Carriages, Horses Are Dying” initiative, which has organized protests and petitions.

“There are horses injured because of overworking and maltreatment. They are not being treated and therefore they die,” she said.

AFP journalists were given access last month to the newest stables built in 2006 on the largest of the islands, Buyukada, where horses were standing in their own manure and only makeshift panels separated their stalls.

Near the stables, horse bones could be seen scattered on the ground.

“The stables are disastrous, full of dirt and trash,” Erturk said. “It is not possible for any living thing to survive there.”

There are no vets or animal hospitals on the islands, and AFP also saw horses with open wounds pulling carriages.

The Istanbul governor’s office has now taken notice, not only announcing the three-month ban but also saying that “illegal” stables would be demolished and new quarantine areas built to contain diseases.

The authorities were rushing to respond after news that 81 horses were buried in pits this week on the biggest island.

They died from glanders – a fatal respiratory disease – which has killed hundreds of horses since an outbreak began in 2017.

Despite the islands being under quarantine, activists say horses were still being brought by boat.

“We have documented it with pictures,” said Erturk. “Last year, 200 horses were brought to the island. Nobody heeds the ban.”

Around 1,000 horses are officially registered on the four main islands but the activists say another 1,000 have been kept illegally.

Sultan Gulyar, of the Turkish Society for the Protection of Animals, said horses were mostly smuggled in during the busy summer season.

“In the winter, they are abandoned in the forests and most of them die,” she said.

Some were given basic shelters, she added, but often fell prey to wild dogs and electricity cables.

Horse drivers refute that animals are kept in squalid conditions.

“We have stable hands and we take good care of our horses,” Osman Fidan, a carriage driver for 35 years, said.

But the newly elected mayor of the islands, Erdem Gul, whose opposition CHP party has long governed there, has acknowledged that the current system needed to change.

“We cannot meet the animal lovers’ demands, we cannot protect horses’ rights, we cannot provide adequate veterinary services, our horse drivers are not compatible with the modern world,” he told AFP last month.

“If we cannot take good care of animals, this is cruelty.”

Gul said he was working on a plan to sharply reduce the number of horses to just a few for nostalgic purposes but with improved living standards, and introduce instead electric vehicles.

“The current system is not working, it is heading for extinction,” he said.

Carriage drivers are angry and worried about their future.

“It is easy to say ‘Let’s remove the system’, but what will happen to the 1,500 people who earn their living from this?” said Hidir Unal, who chairs a group representing the island horse drivers.

Hasan Cetek, 59, who has been doing the job since he was a teenager, defended his trade: “Who will look after those horses? If this is gone, they will all be sausages.”

Gul said before the ban was announced that the municipality would ensure a formula was found to compensate them.

A 90-minute boat trip from central Istanbul, the islands – nine in total but only four served by ferry – offer a scenic escape from the hectic city and its traffic.

Fidan, the carriage driver, said it was vital to life on the petrol-free islands.

“Many are coming to ride the carriages,” he said. “If horse-pulled carriages are removed, this island will be dead.”