Drought-hit Mexicans assert demands that water-sharing with US ends 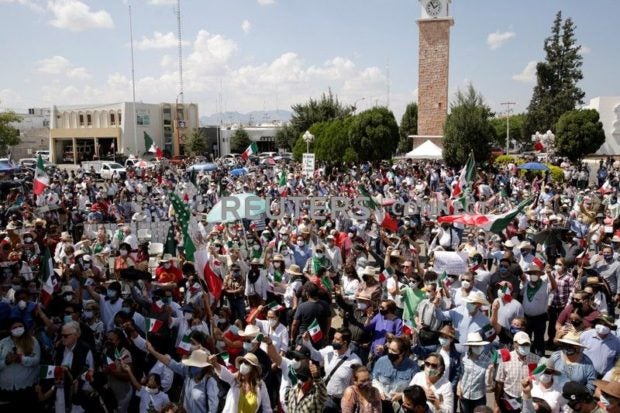 People and farmers protest against the decision of the Mexican government to divert water from La Boquilla dam to the U.S., as part of a 1944 bilateral water treaty between the two countries, in Delicias, Chihuahua state, Mexico September 20, 2020. REUTERS/Jose Luis Gonzalez

LA BOQUILLA DAM, Mexico — Protesters gathered on Sunday in drought-hit northern Mexico in an attempt to retain control of a dam key to government efforts to diffuse tensions over a water sharing pact with the United States.

Mexican President Andres Manuel Lopez Obrador, who has been working to maintain a good relationship with U.S. President Donald Trump, said on Friday that Mexico has to comply with its obligations.

Under the 1944 treaty, Mexico must deliver 1,750,000 acre-feet of water to the United States over a five-year period. Mexico also gets U.S. water from the Colorado River.

Protesters took control of the La Boquilla dam in Chihuahua, which borders New Mexico, in September. A week ago, a protester was killed in gunfire from the Mexican National Guard after the early protest.

Anger boiled over amid plans to divert additional water at the dam due to obligations.

Several protesters told Reuters the water is being “stolen” and that they had gathered because they worried the National Guard would recover control of the dam.

“We’re here united to defend Chihuahua, defend the water they’re stealing from us,” said Marisa Flores, 60. “This is the most critical time we’ve been living in Chihuahua.”

The National Water Commission of Mexico shows in its drought monitor that large parts of Chihuahua have suffered moderate and severe drought for more than six months. Neighboring states Sonora and Coahuila are also affected.

Along the U.S. border in Chihuahua state, several areas on the commission’s drought monitor are marked as in severe drought. Much of the rest is marked as abnormally dry.