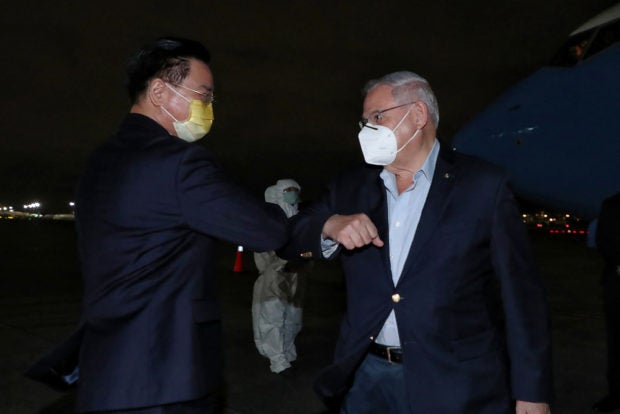 In this handout picture taken and released by Taiwans Ministry of Foreign Affairs (MOFA) on April 14, 2022 visiting US Senator Bob Menendez is greeted by Taiwan Foreign Minister Joseph Wu (L) after arriving at the Sungshan Airport in Taipei. AFP

The group, which also includes Senate Foreign Relations Committee chairman Bob Menendez, is making the latest in a string of visits by foreign politicians to the island in defiance of pressure from Beijing.

A US government plane touched down in Taipei on Thursday evening for what Washington’s de facto embassy said were talks on “US-Taiwan relations, regional security, and other significant issues of mutual interest”.

China’s Communist Party has never controlled self-ruled Taiwan but it views the island as part of its territory and has vowed to one day seize it, by force if necessary.

Those threats have become more bellicose under President Xi Jinping, making the security of Taiwan a rare subject of bipartisan support in Washington.

Menendez was among a group of lawmakers who introduced a bill in February to rename Taipei’s de facto embassy in Washington the “Taiwan Representative Office”.

That would be a diplomatic departure from the tradition of using the word “Taipei”.

Beijing baulks at use of the word Taiwan on the international stage and opposes any country having official exchanges with the democratic island.

Lithuania’s recent decision to allow Taiwan to use its own name for a representative office triggered Beijing to launch a trade war against Vilnius that has angered the European Union.

China’s foreign ministry warned the US senators against “going down on the wrong and dangerous path” ahead of their arrival.

A Swedish parliamentary delegation is also currently in Taiwan.

“The purpose of the visit is very clear,” Swedish lawmaker Charlie Weimers told reporters on Thursday.

“It is to send a signal of support from Europe to Taiwan. And to make sure that signal is being heard all across the Taiwan Strait.”

Former US secretary of state Mike Pompeo infuriated Beijing when he said the United States should diplomatically recognise Taiwan as “a free and sovereign country” during a visit last month.

Russia’s recent invasion of Ukraine has also heightened fears that China might one day follow through on threats to annex its smaller neighbour.

Like most nations, the United States diplomatically recognises Beijing but also maintains de facto diplomatic ties with Taipei and is bound by an Act of Congress to ensure Taiwan can maintain its defence.

US arms sales and diplomatic visits to Taiwan have ticked up under both former president Donald Trump and his successor Joe Biden.

China holds drills around Taiwan as US lawmakers visit