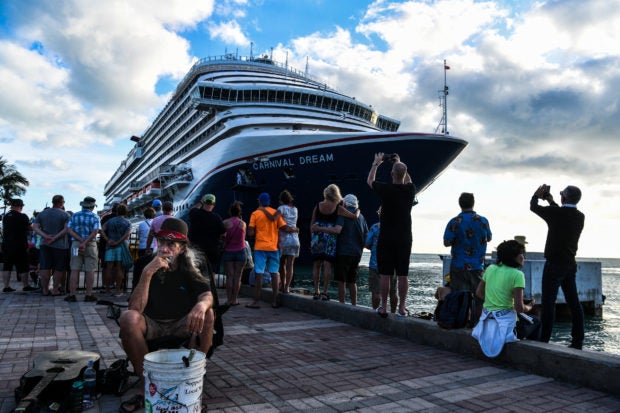 KEY WEST—The island-city of Key West off the southern tip of Florida invites visitors to stroll slowly, enjoy turquoise waters and take in the sunset. But according to some residents, that idyllic peace is endangered — by lumbering, tourist-filled cruise ships.

Following a drawn-out local battle, the cruise tourist numbers are now down, but many residents say more still needs to be done.

While many businesses depend on the tourist throngs, residents such as Arlo Haskell find the ships to be a nuisance and believe they cause environmental harm. As a result, he founded the Safer Cleaner Ships non-profit.

“These cruise ships are an extraction industry that is profiting off of the beauty in Key West while harming that beauty and degrading the experience for everyone else,” Haskell said.

In 2020, his association put forth three local referendums: one to limit the size of cruise ships, another to allow no more than 1,500 people a day to disembark and a third to be able to prohibit boats that do the most damage to the environment.

The three proposals, each approved by between 60 to 80 percent of voters, were ratified by the city council. It was a victory for Haskell — or so he thought.

Then in June 2021, Florida Governor Ron DeSantis signed a law suspending the measures, arguing that voters could not meddle in matters of maritime trade.

Local businesses, including ones also owned by the owner of Pier B — a huge beneficiary of the cruise ships as one of the city’s main docking locations — had donated almost $1 million to a political campaign committee supporting the governor, according to the Miami Herald.

The info showed that cruise ship suspensions during the pandemic did not sink local finances.

Hotels and restaurants seem to have taken advantage of the fact that Florida promoted its open businesses in the middle of the pandemic while other states imposed rules and closings.

The city administration last month decided that since Key West cannot limit the number of cruise ships, it would close its two public docks.

Now cruises can only park at private Pier B, which welcomes only one cruise ship per day. The era of two to three ships arriving daily is over.

The move has been a blow to some businesses.

Although cruise tourists spend only a few hours in the city and usually eat before disembarking — generating little income for restaurants and hotels — they do buy souvenirs and snacks.

The visitors support the likes of tchotchke shops, ice cream parlors and tourist destinations, such as the Ernest Hemingway Home and Museum where the US writer lived between 1931 and 1939, according to Mayor Teri Johnston.

One morning this week, the streets of Key West were nearly deserted. Vanessa Wilder manned her downtown bike rental stand, waiting for the first passengers to disembark from a newly arrived cruise.

“The main shops and the bars down here, we thrive off of these cruise ships,” she said.

“If we didn’t have them, a lot of businesses around here would have to shut.”

Despite his victories, Haskell maintains that things should move one step further, with cruise ships at the private dock not allowed to exceed a size specified by residents.

The boats, according to Haskell “do tremendous damage to our ecosystem” by clouding the water, which endangers the survival of corals.

But Scott Atwell, spokesman for the National Oceanic and Atmospheric Administration in Key West, said the evidence wasn’t so clear.

“We do not have specific studies on whether the cruise ship turbidity is any different than natural turbidity and whether turbidity from the ships’ channel reaches our coral reefs in a detrimental way,” he said.

In the meantime, Key West’s city council has decided to monitor water quality and also support coral restoration under an initiative that charges a fee to Pier B for disembarking passengers.

“We don’t want to get rid of the cruise ships but bring them into a moderate level so that we have good economic conditions and we also have good quality of life for our residents,” Johnston, the mayor, said.