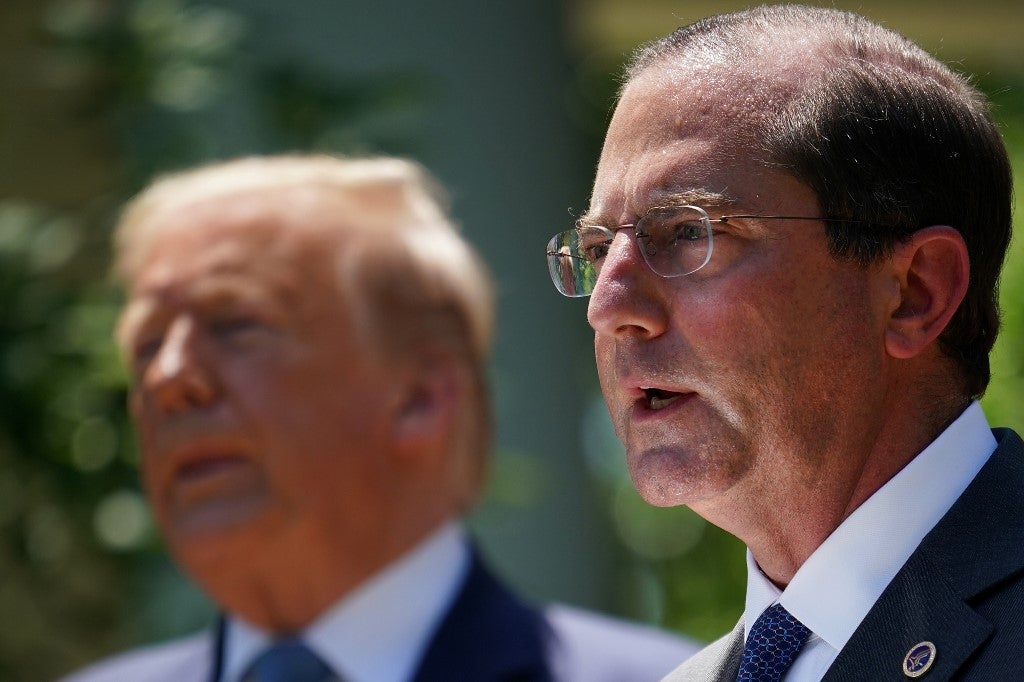 In this file photo taken on May 15, 2020 shows US Secretary of Health and Human Services Alex Azar (R) speaking in the Rose Garden of the White House in Washington, DC as US President Donald Trump (L) looks on. (Photo by MANDEL NGAN / AFP)

TAIPEI, Taiwan — A senior member of US President Donald Trump’s administration landed in Taiwan Sunday for Washington’s highest level visit since switching diplomatic recognition to China in 1979, a trip Beijing has condemned.

During the three-day visit Health Secretary Alex Azar will meet President Tsai Ing-wen, who advocates Taiwan being recognised as a sovereign nation and is loathed by China’s leaders.

Azar is the most senior US cabinet member to visit Taiwan in decades and his visit comes as relations between the world’s two biggest economic powers plunge to historic lows.

In recent days, Trump has ordered sweeping restrictions on popular Chinese apps TikTok and WeChat and the US Treasury Department slapped sanctions on Hong Kong’s leader over a tough law that curbs dissent.

Washington has billed the Taiwan trip as an opportunity to learn from the island’s fight against the coronavirus and to celebrate its progressive values.

“This trip is a recognition of Taiwan’s success in combating COVID-19 and a testament to the shared beliefs that open and democratic societies are best equipped to combating disease threats like COVID-19,” a health and human services department official told reporters ahead of the visit.

But Beijing balks at any recognition of self-ruled Taiwan, which it claims as its own territory and vows to one day seize, by force if necessary.

It has described Azar’s visit as a threat to “peace and stability”, while China’s defence minister warned against Washington making any “dangerous moves”.

As well as meeting Tsai, Azar will hold talks with his counterpart Chen Shih-chung and Foreign Minister Joseph Wu.

He will also meet coronavirus experts and give a speech to public health students as well as alumni of a training programme with the US Centers for Disease Control and Prevention.

Taiwan has become a poster child for defeating the coronavirus thanks to a well-honed track and tracing programme as well as firm border controls.

Despite its proximity and economic links to China it has recorded fewer than 500 infections and seven deaths.

In contrast the US has recorded the most deaths in the world with more than 160,000 fatalities.

A cautious testing of China

The rapidly deteriorating relationship between Beijing and Washington comes as Trump seeks re-election in November.

He is trailing in the polls to rival Joe Biden and has begun campaigning hard on an increasingly strident anti-Beijing message.

As public disapproval has grown for his handling of the epidemic, Trump has pivoted from his previous focus on striking a trade deal with China to blaming the country for the coronavirus crisis.

The two countries have clashed on a range of issues, from trade to espionage allegations and Beijing’s human rights record such as the mass incarceration of Uighur Muslims and the political crackdown in Hong Kong.

Washington remains the leading arms supplier to Taiwan but has historically been cautious in holding official contacts with it.

Under Trump, relations with Taiwan have warmed dramatically and he has approved a number of major military sales, including F-16 fighter jets.

Throughout the 1990s the United States sent trade officials to Taiwan with regularity.

The difference this time, he said, is the context, with Azar travelling at a time when relations between Washington and Beijing have hit a new low.

“Sending him to Taiwan shows respect for the old framework while putting a finger in China’s eye at the same time,” Paal said.

“The fact that they didn’t choose to send a national security advisor or someone else suggests they are trying to come as close as possible to China’s red line but don’t want to cross it.”

The last cabinet minister to visit Taiwan was in 2014 when the then head of the Environmental Protection Agency led a delegation.

Tsai has been hailed not only for her decisive coronavirus response but also, among US Democrats, for her progressive views including advocacy of gay rights, unusual for an Asian leader.