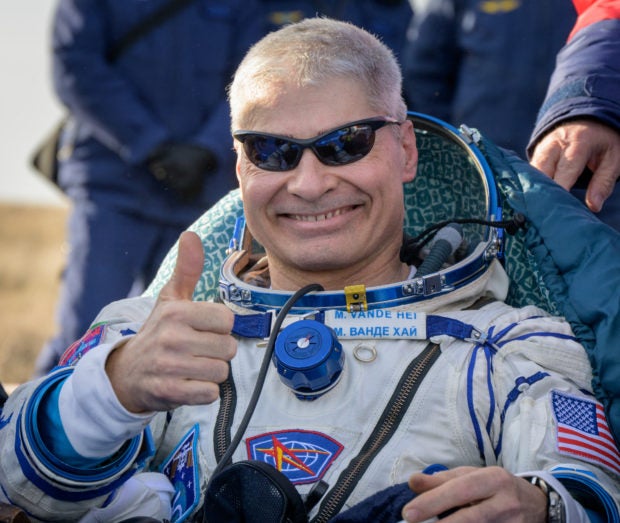 In this file photo taken on March 30, 2022 NASA astronaut Mark Vande Hei gestures after the landing of the Soyuz MS-19 space capsule in a remote area outside Dzhezkazgan (Zhezkazgan), Kazakhstan. AFP

WASHINGTON — After nearly a week back on Earth, Nasa astronaut Mark Vande Hei said Tuesday the relationship between US astronauts and Russian cosmonauts remained positive while on board the International Space Station, despite their countries’ animosity over Moscow’s February invasion of neighboring Ukraine.

Vande Hei landed in Kazakhstan last Wednesday in a Russian capsule, along with cosmonauts Anton Shkaplerov and Pyotr Dubrov.

“About my relationship with my Russian crewmates, they were, are and will continue to be very dear friends of mine,” the American Vande Hei said during a press conference in Texas Tuesday.

“We supported each other throughout everything,” he said. “And I never had any concerns about my ability to continue working with them.”

Vande Hei said the Russian invasion of Ukraine was discussed on board the ISS, but “it was largely how they felt about things and those are things that I would prefer that they get to share directly.”

Moscow and Washington jointly manage the ISS, and Nasa has said cooperation between the two countries’ space programs has so far remained unaffected by their governments’ friction.

But Russian space authority head Dmitry Rogozin has been ramping up incendiary rhetoric on Twitter for weeks.

“If you block cooperation with us, who will save the ISS from uncontrolled deorbiting and falling on US or European territory?” Rogozin wrote in a February tweet — noting that the station does not fly over much of Russia.

Vande Hei said he has stayed away from social media, but heard about some of the tweets from his wife.

“I just had too much confidence in our cooperation to date, to take that those tweets as anything but something that was meant for a different audience than myself,” he said.

The 55-year-old now holds the record for the American who has spent the most consecutive days in space, at 355 days.

He said his legs were a bit “wobbly” for his first eight hours back on solid ground, but he is adjusting quickly to life back on Earth.

“I’m a little disappointed with how normal it feels. I kind of want it to seem more strange being back,” he said.

The goal for the extended mission was to observe the effects of prolonged exposure to a space environment on humans in preparation for future missions — like going to Mars, for example.

“My body is part of the experiment,” Vande Hei remarked, adding that he hopes his record time in space is soon broken.

The record for the longest space journey for any human belongs to Russian cosmonaut Valery Polyakov, who spent 437 days on board the Mir station in 1994 and 1995.

What we know about what happened in Ukraine’s Bucha