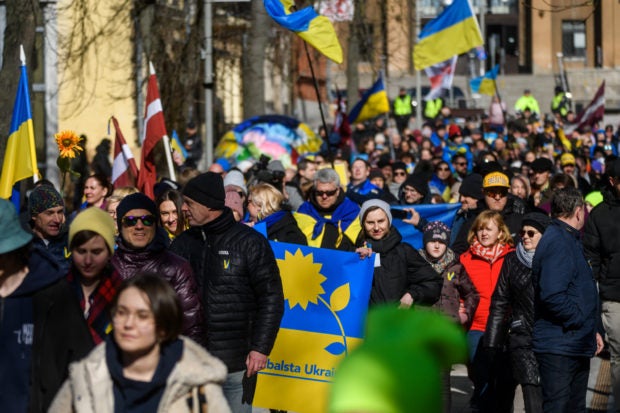 People take part in a demonstration in support of Ukraine on April 3, 2022 in Daugavpils, a southeastern Latvian city with an overwhelmingly Russian-speaking population and situated close to the borders with Belarus and Lithuania. AFP

DAUGAVPILS, Latvia—Hundreds of people rallied Sunday in solidarity with Ukraine in Latvia’s second city of Daugavpils, which has a majority Russian-speaking population and a mayor from a pro-Russian party.

Carrying signs saying “Peace is the goal” and “Latvia supports Ukraine” and waving the flags of both countries, some 700 people demonstrated against Russia’s invasion of Ukraine, police said.

“For many years I watched Russian TV in Latvia and therefore assumed that Russian actions could somehow be justified,” said protestor Vladislavs.

“But with each day we get more and more information from international media which has completely changed my viewpoint, so now I’m attending this rally,” he told AFP.

Chanting ironically, the crowd called for a speech from mayor Andrejs Elksnins, who represents the pro-Russian party Harmony and who refused to attend the rally.

Instead, he released a statement ahead of the demonstration saying “200 refugees, mostly women with kids, have found asylum in Daugavpils”.

He later attended the charity concert following the rally.

Located in the Baltic state’s southeast, Daugavpils is near the Lithuanian and Belarusian borders and some 120 kilometres (75 miles) from Russia.

More than half of its 100,000 residents are native Russian speakers.

Historically a melting pot of people hailing from surrounding countries, after the Holocaust and World War II the city was largely resettled with Russians.

Since the war in Ukraine erupted, the Z symbol associated with the Russian military has appeared in several locations around the city.

A pro-Kremlin crowd also tried to take down the Ukrainian flag at a local high school last month.

At the rally Sunday, one man was spotted with the white-blue-red Russian ribbon pinned to his jacket.

When officers asked him to remove it, he said, “Are the Russian colours illegal now?” but went on to comply with the request.

The rally was led by Latvian pop star Intars Busulis, who is more popular in Russia than in his homeland.

“People are asking me how I could participate in concerts and musical shows on Russian state TV but let me make it clear: I am now abstaining from performing in Russia entirely,” he told the crowd.

“I did it previously because music unites people.”