From bullets to ballots in Bangsamoro | Inquirer News

From bullets to ballots in Bangsamoro 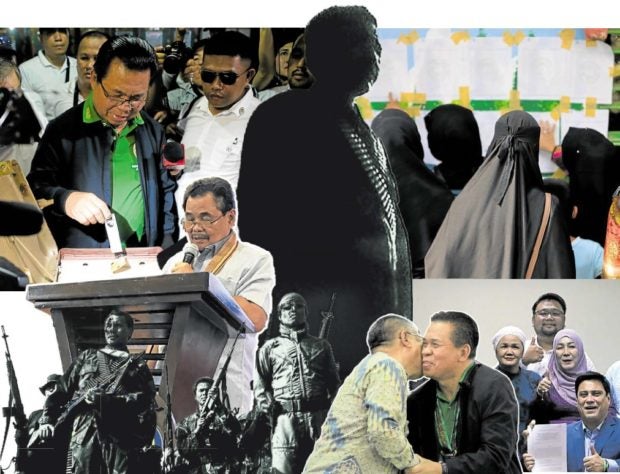 Part of the normalization program for former combatants — in keeping with the Comprehensive Agreement on the Bangsamoro (CAB) — is to provide them the opportunity for political participation, mainly by registering as voters.

“The first electoral exercise I participated in was the plebiscite for BOL. May 9 will be my second time, and this time I will be electing our leaders,” Latip said.

The BOL is the Bangsamoro Organic Law, the charter of the Bangsamoro Autonomous Region in Muslim Mindanao (BARMM) which was ratified during the Jan. 21, 2019, plebiscite.

“This is good, no blood will be spilled, there is no need to fire a gun in battle which will cause civilians to evacuate. What we need now is to choose our leaders wisely, those who will work for the betterment of the Bangsamoro,” Latip said.

Signed in 2014, the CAB formally ended four decades of separatist rebellion that has claimed an estimated 120,000 lives and left a large part of Mindanao, especially the Moro region, wallowing in underdevelopment.

Other key aspects of the peace deal are recognition of Moro identity and acknowledgment of historical injustices through succession of government actions and policies that disfavored and discriminated them as a people.

Due to delays in building the BARMM, the MILF’s political transition also suffered setbacks. As such, the UBJP will be participating in its first electoral exercise on May 9.

In one party assembly, UBJP secretary-general Abdulraof Macacua urged grassroots leaders to elect candidates with integrity and credibility, and for those seeking reelection, good track record of public service.

Lawyer Naguib Sinarimbo, who is UBJP deputy secretary-general, said they had issued guidelines for its members to follow in choosing leaders.

“We guide our members how to correctly vote but did not dictate who to elect,” Sinarimbo said, even as he advised the electorate “to reject the politics of money for it will make the elected officials corrupt.”

“Corrupt and dishonest candidates, once elected, will recover all his expenses through corruption,” said Sinarimbo, who is also interior minister of the BARMM whose interim Chief Minister, Ahod “Al Haj Murad” Ebrahim, the MILF’s chief, has vowed to rule along the precepts of moral governance.

This is why the UBJP is organized as “a political vehicle where we can entrust our development, progressive agenda for the Bangsamoro,” explained Maslamama, deputy minister for transportation and communication in the BARMM.

“UBJP is a principled political party which totally represent[s] the voice of the broader populace and not any political family or clan,” he added.

Ebrahim admitted that joining the political and democratic processes of the country is a major challenge for them given that corruption is like a built-in feature of the government.

It is in this context, Ebrahim said, that their battle cry of moral governance was shaped. He said they would govern the BARMM without imposing Islamic governance but rather impose the moral virtues of Islam which is for all humankind.

Sinarimbo said the proposed Bangsamoro Electoral Code that they are firming up hopes to address the weaknesses in the current political system.

Among its salient features is the antidynasty provision and a prohibition of “political butterflies,” or “turncoatism.” With a parliamentary setup, the Bangsamoro government needs to have a strong and functional political party system.

Another electoral code feature is the prohibition on tandems or slate coming from the same family in a given locality.

“What we are trying to avoid is the concentration of power in a local government into a single clan or family, like a father as mayor, the wife as vice mayor, and the children as council members. What is allowed, for example, is either the father or mother as mayor, but the other family members can seek elective posts in the province,” Sinarimbo explained.

For its first foray into electoral battle, the UBJP has entered into alliances with political dynasties, especially in the provinces of Maguindanao and Lanao del Sur.

In Maguindanao, it endorsed the gubernatorial bid of Rep. Esmael Mangudadatu who vigorously pushed for the enactment of the law extending by another three years the MILF-led Bangsamoro Transition Authority.

In Lanao del Sur, the UBJP struck an alliance with the local Siap Party, in the process backing the reelection of Gov. Mamintal Alonto Adiong Jr., whose clan is a known supporter of the Bangsamoro cause.

The UBJP’s endorsement is also being sought by national politicians, especially those running for president. Ebrahim has already announced that they will endorse presidential and vice presidential candidates to help elect national leaders who are committed to the continuity of the Bangsamoro peace process.

Ebrahim, who is UBJP president, said they were endorsing candidates who they believed were pursuing the same vision and agenda as theirs.

“The world is watching us. They see the GPH (Government of the Republic of the Philippines)-MILF peace process as [a] model and there is no room for failure,” Macacua said.

Iqbal tells Bangsamoro: We can’t support a candidate who’ll bring back past horrors