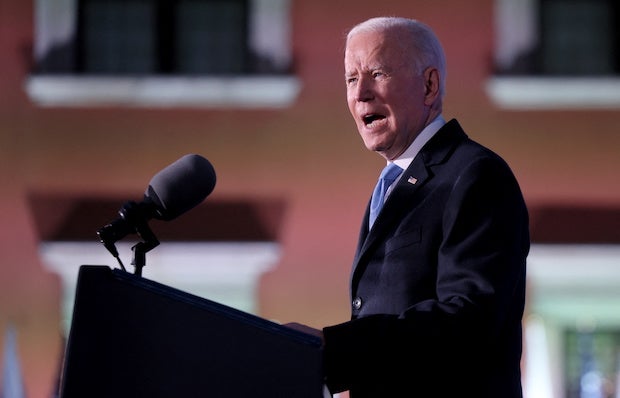 US President Joe Biden speaks during an event at the Royal Castle, amid Russia’s invasion of Ukraine, in Warsaw, Poland March 26, 2022. (REUTERS/Evelyn Hockstein)

WARSAW — US President Joe Biden said on Saturday that Russia’s leader Vladimir Putin “cannot remain in power” in a fiery speech pushing the world’s democracies to unite to support Ukraine, though the White House later said Biden was not calling for regime change in Moscow.

“For God’s sake, this man cannot remain in power,” Biden told a crowd in Warsaw after condemning Putin’s month-long war in Ukraine as an assault on global freedom and security.

The comments sharply escalated conflict between Moscow and the West over its invasion of Ukraine.

But a White House official said the remarks did not represent a shift in Washington’s policy that it is not seeking regime change in Russia.

Still, they came on a day of escalating rhetoric as Biden also described branded Putin a “butcher” during a meeting with refugees who have fled the war in Ukraine to the Polish capital.

“The President’s point was that Putin cannot be allowed to exercise power over his neighbors or the region,” the White House official said. “He was not discussing Putin’s power in Russia, or regime change.”

On Saturday, Biden said the West was united against Russia’s invasion but also added that NATO was a defensive security alliance that never sought Russia’s demise.

Biden’s speech was delivered at Warsaw’s Royal Castle before hundreds of Polish elected officials, students, and US embassy staff, many holding US, Polish, and Ukrainian flags.

“The West is now stronger, more united than it has ever been,” Biden said.

Calling the fight against Vladimir Putin a “new battle for freedom,” Biden said Putin’s desire for “absolute power” was a strategic failure for Russia and a direct challenge to a European peace that has largely prevailed since World War II.

Thousands of Russians in Prague protest vs war in Ukraine