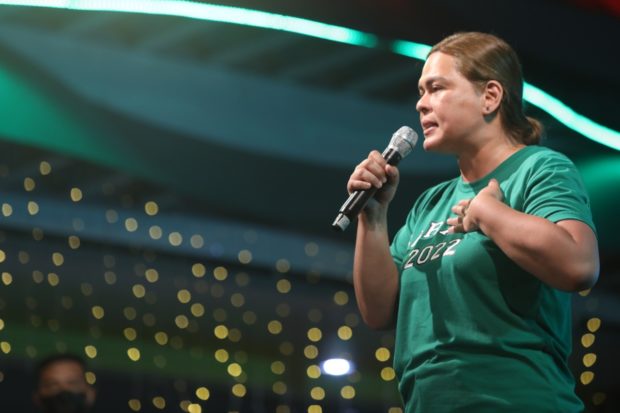 MANILA, Philippines — Vice presidential candidate Sara Duterte-Carpio has secured the support of some mayors in Bulacan province, one of the most vote-rich provinces in the country.

Duterte-Carpio thanked the mayors for their support during her campaign in Bulacan on Sunday, March 20. It was the third time that she visited Bulacan since the launch of the campaign period for national candidates last February 8.

During the “Sara para sa Barangay” event in San Miguel town, Duterte-Carpio was introduced by Tiongson, who claimed that all 49 barangays in his jurisdiction will back her vice-presidential bid.

According to Lakas-CMD, when Tiongson asked the crowd if they could produce 100,000 votes for Duterte-Carpio, the people answered in the affirmative.

Bulacan is the fifth most vote-rich province in the country with over 2 million voters, according to the Commission on Elections.

Based on the latest Pulse Asia survey conducted from February 18-23, Duterte-Carpio leads the vice presidential race with 53 percent, followed by Senate President Vicente Sotto III at 24 percent and Senator Francis Pangilinan at 11 percent.