'The ball is in their hands,’ Bato won’t appeal e-sabong halt to Duterte again | Inquirer News

‘The ball is in their hands,’ Bato won’t appeal e-sabong halt to Duterte again 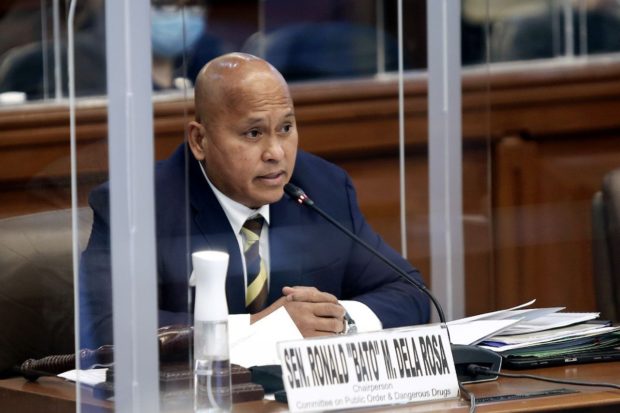 MANILA, Philippines — “The ball is in their hands,” said Senator Ronald “Bato” dela Rosa, who would no longer personally appeal the halt of e-sabong operations to President Rodrigo Duterte.

(Not again. It’s been done. I already told him…The ball is in their hands. They should now handle it.)

(It’s their call if they will shoot the ball for the victory of the Filipino people or dribble it until the end of the 18th Congress.)

Dela Rosa, citing his conversation with Duterte, earlier said the President agrees with the call of senators to suspend e-sabong operations in the country until the disappearance of over 30 cockfight enthusiasts is resolved.

Dela Rosa, meanwhile, questioned why Pagcor would not immediately act on the senators’ call.

(Pagcor won’t act on it. I don’t know if they’re using the President as a shield so they have an excuse not to suspend e-sabong.)

(But the Senate has done its duty before the Filipino people and we’ve seen the evils behind e-sabong that’s why we have this call, this stand against e-sabong. But they are the one with control over this industry. We cannot impose our will upon them.)

During Friday’s hearing, Domingo explained that while Pagcor would like to address the issues arising from the e-sabong industry, it could not suspend its operations without a “clear and legal basis,” citing legal implications and a “serious loss of revenue.”

Dela Rosa, however, stressed the need to at least “reduce addiction” to e-sabong.

(Around 350 cockfights a day, this happens 24/7, you can just imagine how fast one can get addicted to this game. You can access it in your own bedroom with a cellphone.)

(You will be buried in financial problems because this is continuous, it’s non-stop…The more you desire to recover your losses, the you will get addicted.)

He also raised concerns over the reach and scope of e-sabong patrons.

“It goes beyond our territorial jurisdiction. Kahit nasa [Even if they’re in] Dubai, nasa [in] Saudi Arabia yung [our] OFW (overseas Filipino workers), pwede siyang mag-esabong, ang hirap talaga [they can access e-sabong so it’s hard],” he added.