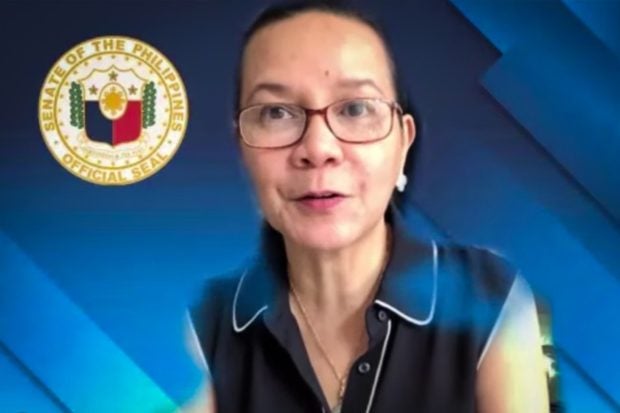 MANILA, Philippines — Senator Grace Poe on Friday accused the Philippine Amusement and Gaming Corporation (Pagcor) of “using the President as an excuse to delay” the suspension of e-sabong licenses amid the disappearance of 34 cockfight enthusiasts.

However, Pagcor chairperson Andrea Domingo said they are in a “very difficult position,” considering the “serious loss of revenue” and legal implications of suspending e-sabong operations “without a clear and legal basis.”

During the hearing of the Senate public order committee on the missing individuals involved in cockfighting, Poe stressed that suspending the e-sabong licenses is under Pagcor’s “mandate of minimizing if not eradicating the evils, malpractices, and corruptions associated with gambling.”

Further, the senator said that Pagcor’s charter does not require it to seek “authorization from the President for any action to proceed.”

“While Section 7(e) of their charter gives authority to the President to direct and authorize the performance of other functions or duties, it does not mean that Pagcor is not allowed to do anything without the President’s permission. I believe Pagcor is using the President as an excuse to delay that decision,” Poe said.

But in response, Domingo said Pagcor, as part of the executive branch,” is “duty-bound to respect and follow the chain of command.”

“This is not an easy thing to do because it has a very strong effect on the revenue generation that we’re doing and also on the regulation of e-sabong itself,” she added.

According to Domingo, e-sabong activities generated P400 million of revenues for the government each month in 2021. This grew to P640 million per month starting January this year.

Last week, a resolution, signed by 23 senators, was issued calling on Malacañang and Pagcor to suspend the licenses of e-sabong operators in the country until the disappearances have been resolved.

Domingo said that while Pagcor respects the resolution of the senators, it also has to “do an analysis or completed staff work on what the repercussions of this would be.”

Among these repercussions include the loss in revenue that would eventually have implications on Pagcor.

Domingo explained that there was a previous incident wherein the sitting president ordered Bureau of Immigration (BI) commissioners to reduce the amount to be paid by foreigners for their registrationd.

The BI commissioners immediately implemented this, according to Domingo.

“Thereafter, COA (Commission on Audit) disapproved and disallowed the reduction,” she added, noting she was able to talk to one of the BI commissioners, who said they were “being charged the difference between the original price and deducted price being implemented though the order of the president.”

If Pagcor pushes through with the suspension of e-sabong operations, Domingo said they will “stand to the peril of having to pay P640 million a month while we suspend the operations without a clear and legal basis.”

“We are all emotional here. I do condole with everybody who suffered from this but we also have to look into the repercussions of this,” she said.

Further, Domingo said Pagcor has contractual obligations with its licensees. She said Pagcor may face charges from the licensees for breaching its contract with them.

“While we do really want to solve this problem of missing persons, Pagcor is a civilian government corporation that is not empowered and does not have the authority that the law enforcement agencies have,” Domingo said.

“This is where we stand now. We do not want not to implement what you are urging us to do, however, we are in a very difficult position because of the different authorizations that we have,” she added.

Domingo then assured senators she will talk to Executive Secretary Medialdea to know the sense of President Rodrigo Duterte on the issue.

(At the very least, I will meet with the Executive Secretary so I will know what the President’s sense is. And if the President said to suspend…Even if it’s verbal ‘suspend it,’ we will suspend.)