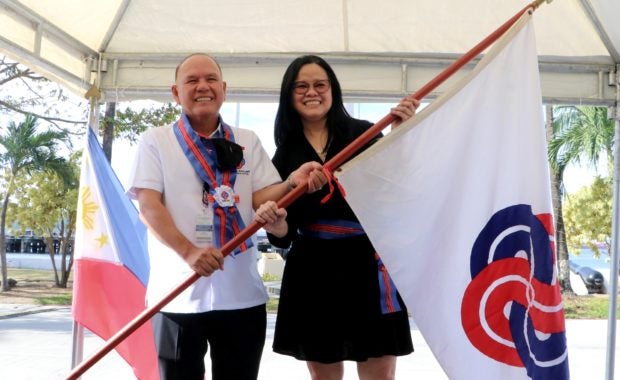 SUBIC BAY FREEPORT— The highest position in the Subic Bay Metropolitan Authority (SBMA) has been formally passed from one volunteer to another after the agency’s outgoing head, lawyer Wilma Eisma, officially welcomed former Olongapo City mayor Rolen Paulino Sr. as the new chairman and administrator on Monday (March 7) in front of the agency’s administration building.

Eisma was one of the first volunteers in this free port when now Sen. Richard Gordon served as the agency’s chief, while Paulino also served as a volunteer for the agency during the transition of the free port from being a U.S. Naval Base.

During his acceptance speech, Paulino said that his priority is the “beautification” of the free port now that most parts of the country are placed under the most relaxed alert level 1, adding that he intends to make the area “greener” by planting more “flora” in tourist spots.

He said he would also drum up the sports tourism scene since the area is conducive to becoming the country’s sports mecca while making it more appealing and investor-friendly.

“Let us make Subic Bay Freeport attractive to all. And let us make each other’s lives easy, “Paulino said.

He also asked employees, businessmen, locators, directors, and stakeholders for help, saying he could not accomplish his task without their help.

Meanwhile, Eisma said: “This job is not for the faint-hearted, and it really takes a village. I know Kuya Rolen has the chops to make it, but with your help, he can do so much more.”

She added that the new chairman’s success is the success of every employee of the SBMA. INQ