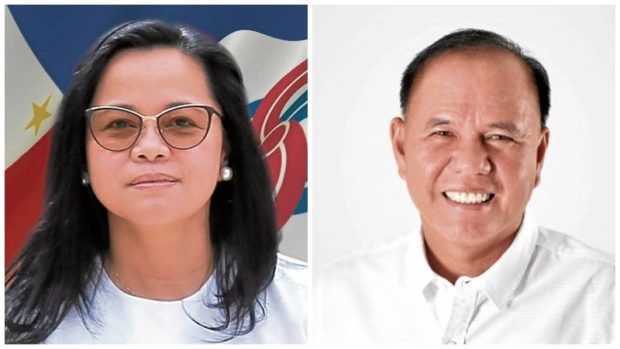 Wilma Eisma has resigned as SBMA chair and administrator. She will be replaced by former Olongapo City Mayor Rolen Paulino. (INQUIRER FILE PHOTOS)

SUBIC BAY FREEPORT—Subic Bay Metropolitan Authority (SBMA) chair and administrator Wilma Eisma stepped down from her post on Tuesday, citing health reasons as among the factors that pushed her to leave after five years of leading the agency.

Former Olongapo City Mayor Rolen Paulino replaced her and was sworn in at Malacañang on the same day.

In a statement, Eisma said she would leave the free port with a “happy heart,” adding that she and her team had set realistic goals and achieved them to give Subic Bay “a better, more sustainable future.”

“It will always be my honor not only to be the first woman appointed to this job but also to be one leader who proved that, together, the stakeholders of Subic Bay will always be stronger and will always overcome,” she said.

As early as October last year, Eisma said she had submitted her notice of resignation to President Rodrigo Duterte “to focus on her health and family,” but the latter did not accept her decision.

Eisma was one of the first volunteers in the free port when now Sen. Richard Gordon served as SBMA chair and administrator.

She was also a former manager of the local regulatory affairs and community relations division of Philip Morris Philippines Manufacturing Inc. before she was appointed as administrator of SBMA on Dec. 27, 2016.

Duterte appointed Eisma to the post amid a leadership rift between then SBMA chair Martin Diño and acting administrator Randy Escolango.

But since Executive Order No. 340 issued by then-President Gloria Macapagal-Arroyo existed at that time, disagreements between the chair and the administrator of the agency persisted.

EO 340 split the powers and duties of the highest position in SBMA between the chairman of the board and the administrator.

However, after a year, Duterte signed EO 42 which repealed EO 340 and consolidated the powers under Eisma.

Eisma’s term was supposed to end in June this year.