BALAYAN, Batangas — What are the odds that on a rare occasion that a supporter was allowed onstage during a sortie of presidential aspirant Ferdinand “Bongbong” Marcos Jr. and his running mate Sara Duterte-Carpio, it had to be “Leni”?

Such was the case on Thursday as senatorial aspirant actor Robin Padilla was singing his usual campaign number, Eric Clapton’s “Wonderful Tonight” to the delight of female fans who had been screaming his name.

Giving in to his supporters who wanted to get close to him and hug him, the actor-turned-politician unwittingly called onstage one of them. The giddy fan immediately gave him a bear hug, while the actor swung her around, before asking for her name.

“Leni po,” the supporter said, further driving the crowd into a frenzy.

Padilla is married to actress-host Mariel Rodriguez. This was an apparent dig to Leni Robredo, who is running against Marcos for the top elective post. 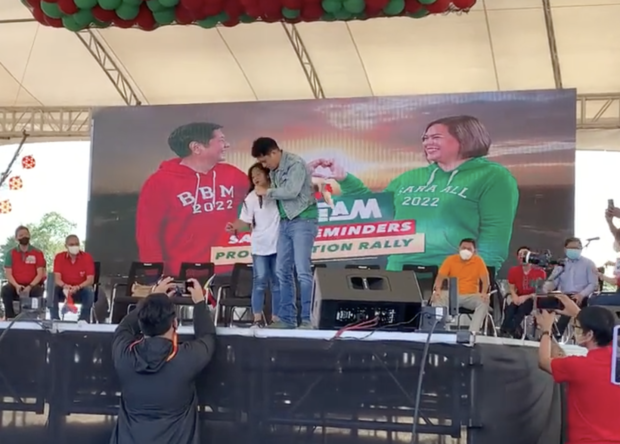 The supporter could not hold her admiration as she told the crowd: “Akin ang araw na ito (This day is mine!)”

Marcos and Duterte-Carpio were also present during the event. They were joined by other senatorial candidates in the Uniteam slate.

While Padilla enjoys the support of Duterte-Carpio, there has been some confusion on whether or not he is officially in the Uniteam ticket.

During the campaign in Ilocos Norte, Duterte-Carpio said their Senate slate is now complete before mentioning last the name of Padilla. However, after the sortie, Marcos said Padilla is “not in the twelve,”

“(He’s) part of the group,” Marcos said then, without clarifying what group he is referring to.