Marcos-Duterte confusion? So is Robin Padilla in or not? | Inquirer News

Marcos-Duterte confusion? So is Robin Padilla in or not? 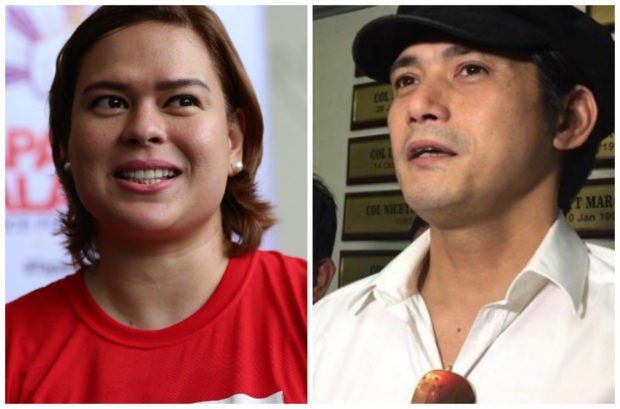 At a grand rally in Ilocos Norte on Wednesday, Feb. 6, 2022, Davao City Mayor Sara Duterte-Carpio announced actor Robin Padilla as the 12th on the UniTeam lineup. But later, Ferdinand Marcos Jr. said he was not in the lineup but was “in the group.” (FILE PHOTOS)

MANILA, Philippines — Presidential candidate Ferdinand Marcos Jr. and his running mate, Davao City Mayor Sara Duterte-Carpio, seem to be singing a different tune about whether or not actor Robin Padilla is the 12th person in their senatorial slate.

At a grand rally in Ilocos Norte, Duterte-Carpio announced that she was with the senators in the UniTeam, which is how she refers to her tandem with Marcos.

“We already have twelve on this day,” she said in Filipino, before reading the names of the 11 senators initially on their senatorial lineup. She mentioned  Padilla’s name last.

Padilla was present at the rally and even sang Eric Clapton’s “Wonderful Tonight” before the crowd.

Like the other senatorial candidates in the UniTeam slate, Padilla was also given the chance to speak and ask for support in the upcoming polls.

After the rally, however, Marcos told reporters in an ambush interview that Padilla was “not in the twelve, but is part of the group.”

Marcos did not clarify which group he was referring to.

Even Padilla himself seemed to be unaware of the situation.

“I don’t know if it’s confirmed,” Padilla, speaking in Filipino, told reporters in an ambush interview.

“There’s no formal talk. With Ma’am Sara, I’m really under her,” he added.

On Feb. 8,  at their proclamation rally at the Philippine Arena, Duterte-Carpio mentioned seven senatorial candidates whom she called her “friends” but who were not included in the official slate.

Among her “friends” was Padilla, known to be a close ally of the Duterte family.

Sara says Robin Padilla is 12th on lineup, but Bongbong says no