Caught between crises, Biden to urge optimism in State of the Union | Inquirer News

Caught between crises, Biden to urge optimism in State of the Union 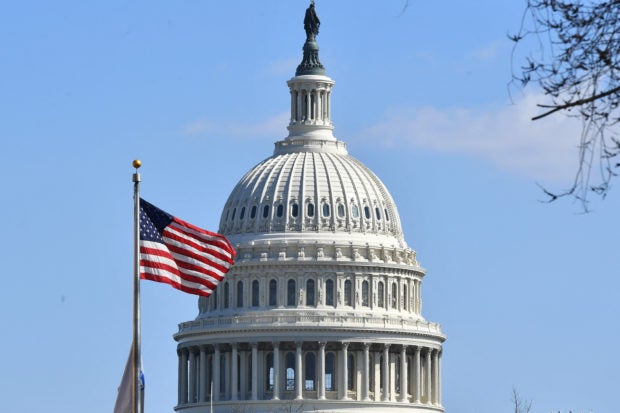 A US flag flies in front of the US Capitol in Washington, DC, on February 28, 2022, a day ahead of US President Joe Biden’s first State of the Union address. AFP

WASHINGTON — Embroiled in the most severe US-Russia crisis since the Cold War, President Joe Biden will take on a no less difficult domestic challenge during his State of the Union address: restoring Americans’ optimism.

Biden has been bouncing between calamities his first year in office — from Donald Trump threatening US democracy to the Afghan debacle, from waves of Covid variants to economic turmoil, and now Russia’s invasion of Ukraine.

Yet when he addresses Tuesday’s joint session of Congress, Biden will accentuate the positive.

That’s pure Biden, the happy warrior who came out of retirement because, he says, someone needed to rescue America from Trump.

But even for a man relaxed enough to poke fun at himself in public and devout enough to attend church most weeks, these are grim times. His speechwriters for the keynote address will have trouble persuading Americans otherwise.

Biden claims he is delivering on his big promises to unify the nation, end Covid-19 and restore US prestige abroad.

“I think we’re making slow progress on some of these things, but that’s where we’re moving,” he said over the weekend in a YouTube interview.

The country, however, disagrees.

In a new Washington Post-ABC poll, only 37 percent approve of Biden’s presidency, and 55 percent disapprove. An NPR poll found that more than half the country considers Biden’s first year a failure.

And the backlash is building ahead of what polls indicate will be a defeat for Democrats in November midterm elections, likely delivering at least one of the chambers of Congress to Republicans.

Already bogged down by the highest inflation in 40 years and a nation deeply divided between left and right over just about everything, Biden is now also facing another foreign crisis, just over six months after the traumatic US withdrawal from Afghanistan.

Biden’s getting some kudos for forging historic Western sanctions on Russia, while supplying the Ukrainian military. It is, supporters say, his finest hour.

Psaki told reporters Monday that he’d speak about his efforts to “rally the world” and “the importance of the United States as a leader in the world standing up for values.”

But US voters generally care little about foreign policy. After the embarrassing end last year to the two-decades long Afghan war, which saw the US withdraw as the Taliban returned to power, they care even less.

Biden may be engaged in a titanic struggle with Moscow. But look what happened to George H.W. Bush: he presided over the end of the Soviet Union in December 1991 — and less than a year later got voted out of office.

In that election, Democratic strategist James Carville coined the famous motto “the economy, stupid,” to keep Bill Clinton on the one message he thought really mattered.

Polls indicate Biden might want to scribble those same words across the top of his speech.

According to the Post-ABC poll, 54 percent of Americans think the economy got worse under Biden and only 17 percent that it improved.

The White House insists that on the whole, the economy is booming.

Job creation and GDP have roared back from the pandemic shutdown. Inflation, Biden argues, is temporary, linked to global supply chain issues triggered by Covid-19.

“It’s hard for people to get their arms around the fact that we’re the fastest growing economy for 40 years, wages are actually up and not down, unemployment is the lowest it’s been… just incredibly low,” Biden said in his weekend interview.

But explaining the disconnect between what Americans feel and what he says is happening will be crucial.

On Friday he nominated the first African American woman in history to the Supreme Court. With her stirring personal story and likely Senate confirmation, Judge Ketanji Brown Jackson gives Biden and his Democrats ability to claim they’re changing the country’s fabric for the better.

Elected in part for pledging to take Covid seriously, Biden also may use Tuesday evening’s speech to pivot to a post-pandemic future, putting the long national nightmare into the rearview mirror.

Biden recognized during his interview the “phenomenal negative” impact of Covid on the US psyche and the most basic, but painful of questions facing Americans: “How do you get up in the morning and feel happy?”

The nation will be listening Tuesday to see if he can answer.