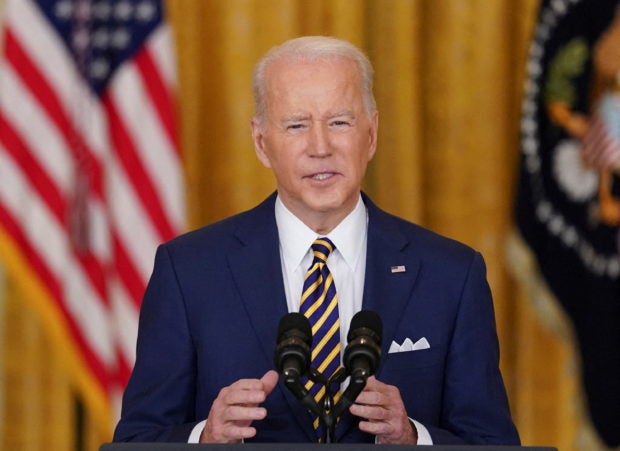 WASHINGTON  – President Joe Biden on Wednesday said he had underestimated the extent of Republican opposition to his programs and acknowledged Americans’ frustration at the slow pace of COVID-19 testing, but said the United States was on track to meet considerable challenges from the pandemic and inflation.

Marking the near one-year anniversary of his presidency, Biden, a Democrat, faced a flurry questions on the country’s bumpy COVID-19 response, relations with Russia and the future of American democracy during a rare formal news conference.

Promising to confront what he called the unexpectedly “stalwart” opposition of Republicans, Biden promised to take his case for action directly to voters as Democrats seek to defend their congressional majorities in a Nov. 8 election.

“Our work’s not done,” said Biden, whose approval ratings have sagged in recent months with COVID-19 hospitalizations at a record. “Should we have done more testing earlier? Yes,” Biden said.

Asked whether he had promised more than he could deliver, Biden was adamant: “I didn’t over-promise.”

But he acknowledged that his signature economic and social spending legislation, Build Back Better, was all but dead in its old form.

Instead, the president said, he expected that he could get “big chunks” of that bill passed, if not the full package.

With much of his domestic agenda stalled, Biden also faced questions on rising tensions with Russia over a military build-up in and around Ukraine. Biden vowed unprecedented sanctions if Russia invades its European neighbor.

“Russia will be held accountable if it invades,” Biden said. “They’ll pay a stiff price.”

His aides said they envisioned the news conference as an opportunity to frame the president’s approach to his second year and to sell the American people on the accomplishments of the first. A more expansive message will follow when Biden delivers his State of the Union address to Congress on March 1.

Four-fifths of qualified Americans have received at least one vaccine shot even as the virus continues to kill nearly 2,000 people per day in the United States, and the unemployment rate has dropped amid record job creation.

Biden’s fellow Democrats are fighting to retain their control of Congress in the coming elections amid a flood of Republican-backed state laws that civil rights advocates say could suppress Black and other minority votes.

Biden has held nine total news conferences in his first year in office, including six solo, a slower pace than his most recent predecessors, according to the American Presidency Project at University of California, Santa Barbara.