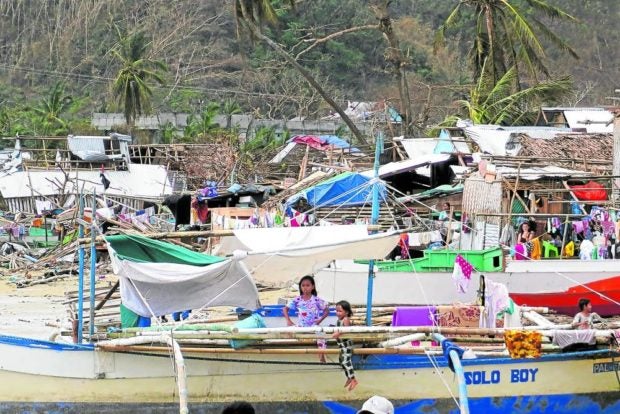 BETWEEN THE GOV’T AND THE DEEP BLUE SEA With their damaged homes behind, two young girls look out to the sea in an “Odette”-hit village in Palawan in December. —OFFICE OF THE VICE PRESIDENT PHOTO

MANILA, Philippines — After crushing farmers with the rice tariffication law and an eased imports policy, the Duterte administration will likely kill fishermen with its plan to import 60,000 metric tons of fish.

“Import pa more (Keep on importing),” Sen. Panfilo Lacson posted on Twitter. “After killing our farmers by importing vegetables and fruits, it is the turn of our fishermen to die.”

Lacson made the tweet after Agriculture Secretary William Dar signed on Monday a certificate of necessity to import 60,000 tons of “small pelagic fishes” to augment the country’s supply.

Lacson slammed Dar’s plan to import fish, such as round scad (galunggong) and mackerel, even after the fisheries sector reeled from almost P4 billion in losses due to Typhoon “Odette” (international name: Rai) last December.

Fishermen, in fact, sustained the most damage in the agriculture sector with P3.97 billion, or a third of the total damage of P13.3 billion.

Lacson criticized the agriculture department for its “history of allowing potential corruption” in importing agricultural products, such as pork, poultry and fish and seafood products.

Lacson said it was revolting that the Philippines had to import galunggong from China, whose vessels have bullied Filipino fishermen in the West Philippine Sea.

“Because of the incursions of Chinese vessels, we are denied 300,000 MT of fish … If you divide 30 million kilos of fish by 40 kilos, that would translate to 7.5 million Filipino families who have to buy fish from sources other than the Philippines. That’s unacceptable,” said the senator, who is running for president under the Partido para sa Demokratikong Reporma.

During last year’s Senate investigation into the alleged smuggling of seafoods and other products, Lacson cited data showing that the Philippines had lost more than P1 billion yearly in foregone revenues from 2015 to 2020, on imported fish and seafood alone.

He also questioned the huge discrepancies between the records of the World Trade Organization and the Philippine Statistics Authority in terms of fish and seafood importation from the top 15 exporting countries from 2015 to 2020.

“If corruption infects the Department of Agriculture (DA) that should be at the forefront of food security efforts, it goes beyond human conscience,” he said.

Last month, Lacson aired the lament of Filipino farmers whose livelihoods were adversely affected by the entry of agricultural products into the country, such as strawberries and carrots.

“The worry of farmers is not just the influx of smuggled agricultural products. They are also concerned about agricultural pests that manage to slip past our authorities’ inspection,” he said during an earlier Senate hearing.