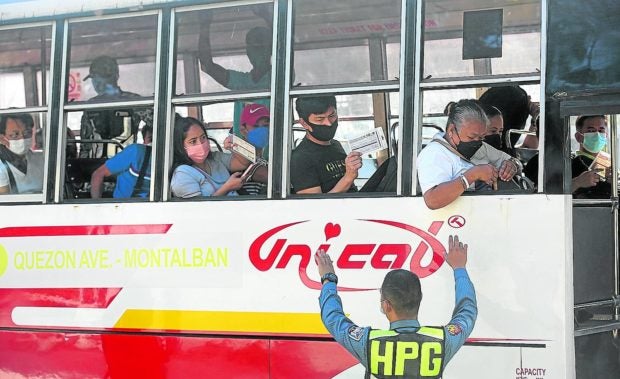 ‘LET ME SEE THEM’: An enforcer under the Inter-Agency Council for Traffic implements the “no vaccination, no ride” policy, telling a group of bus passengers to show their vaccination and identification cards before letting the vehicle pass along Commonwealth Avenue, Quezon City, on Tuesday, Jan. 18, 2022. (Photo by NIÑO JESUS ORBETA / Philippine Daily Inquirer)

MANILA, Philippines — Jeremy Pineda, 27 and unvaccinated against COVID-19, headed out on Tuesday morning to get her unified multipurpose identification card.

Pineda prepared for the Department of Transportation’s mandatory “no vaccinations, no rides” policy by bringing along a copy of her medical records, including a document showing that she needed to undergo medical tests, and a copy of a news report indicating that people like her are exempt from the policy.

“I brought even my previous medical records from my previous doctor, just to be sure that I have the necessary documents to present [to an enforcer],” she told the Inquirer by phone.

Pineda boarded a UV Express from Barangay Bagong Ilog in Pasig City, where she lives, to get to Robinsons Galleria on Ortigas Avenue—by her estimate, a 15-minute ride. The vehicle driver asked for her vaccination card.

When Pineda presented her medical records, which she believed would be enough to allow her to ride a public utility vehicle (PUV), the driver said it was up to her to answer for him if he got caught.

“I showed my medical certificate proving that I have an existing illness, but the driver told me that it won’t be accepted [by enforcers],” she said.

Seated in the vehicle filled with fully vaccinated passengers, Pineda decided to disembark, embarrassed by the driver’s remarks. But she said she understood the driver, who apologized to her and said he was merely complying with the policy.

She sent a message to the official Facebook page of the Land Transportation Franchising and Regulatory Board, reporting her experience.

Pineda said she wanted to walk to Galleria so she could get the ID needed for her medical transactions there. But she was “just too emotional” and began to cry.

Still, she decided to push through with her other plan for the day: a meeting with her doctor at the Philippine General Hospital (PGH). She took the first jeepney from Pasig headed to Quiapo, Manila. On Legarda, she rode a second jeepney going to Divisoria.

She got on a third jeepney on Rizal Avenue that went straight to Taft Avenue and PGH.

Pineda rode a total of six jeepneys for her round trip, but none of the drivers asked for her vaccination card or her medical papers. She said there were no enforcers during all that time and observed that they were “more focused” on UV Express rides.

“The jeepneys were far more relaxed, from what I saw,” she said.

Pineda lives in an apartment with her former coworkers. She recently quit her job as a virtual English teacher due to regulations imposed on the unvaccinated, such as undergoing a swab test every two weeks.

“All of my former workmates are vaccinated. I am living with them just to complete the lease on our apartment,” she said, adding she would return to her home in Binangonan, Rizal, when the contract expired.

Pineda “chose not to get vaccinated” because of her medical condition and the required tests. “What I am waiting for is a declaration from my doctor: that I am cleared and safe to get the COVID-19 vaccine,” she said.

Asked if she would still go to the mall to claim her ID, she said she was afraid of the difficulty of getting a ride in a PUV or of even getting one in the long run.

Pineda’s experience was just one among many observed during the early implementation of the “no vax, no ride” policy.

There are exemptions to the policy: unvaccinated people with medical conditions that prevent them from getting jabbed, those working in essential industries under alert level 3 as determined by the pandemic task force, and those buying essential goods and availing themselves of medical services, among others.

Labor Secretary Silvestre Bello III said the exemptions included workers, who should only present proof of their employment.

“These are not additional exemptions. [The workers] are already exempted in our department order,” DOTr spokesperson Goddes Libiran told the Inquirer.

She added: “Not all workers are exempted. Only those workers who are working in industries allowed to operate under alert level 3 are exempted.”

In Taguig, the city government has set up registration booths and deployed shuttle vehicles at vaccination checkpoints to provide residents with easier access to vaccines.

Some 450 unvaccinated persons flagged at the checkpoints were brought to jab sites on the first day of its implementation on Jan. 17, the city government said on Tuesday.

It said the exemptions to the DOTr policy were being honored.

Taguig Mayor Lino Cayetano thanked the Department of the Interior and Local Government for “its intent in replicating the initiative of the city in other parts of Metro Manila.”

In Muntinlupa City, its Traffic Management Bureau coordinated with the Land Transportation Office in conducting a “surprise inspection” of compliance with the “no vax, no ride” policy.

As of Jan. 17, two jeepney drivers had been apprehended for violating guidelines on maximum passenger capacity.

“The government must steer away from its anti-poor and anti-people policymaking schemes and adopt a rights-based approach in handling the COVID-19 surge through an efficient surveillance system, free mass testing, contact tracing, isolation and treatment,” she said.

Brosas said there were ways to prevent the spread of COVID-19 and its Omicron variant and encourage people to get jabbed “without having to set aside their basic human rights.”

She suggested “aggressive information dissemination” on COVID-19 prevention and treatment and vaccines at the barangay level, especially for those with no access to the internet.

—WITH REPORTS FROM JANE BAUTISTA AND JULIE M. AURELIO