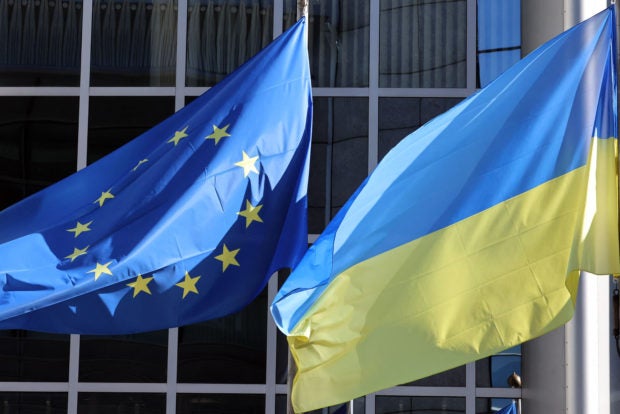 PARIS — With Ukraine pleading to be allowed to join the European Union as Russia invades, we look at the bloc’s history of expansion and its crowded waiting room.

The European bloc, which began with six countries in 1957, has expanded several times with some of the most geopolitically sensitive additions coming since 1995.

That year Austria, Sweden and Finland joined, giving the bloc a border with Russia for the first time.

Then in an historic 2004 expansion, the EU embraced eight former communist countries including Poland, the Baltic states, Hungary, Slovakia, Slovenia and the Czech Republic, as well the Mediterranean islands of Cyprus and Malta.

Then in 2016 came the shock of the Brexit referendum when the United Kingdom narrowly voted to leave. The acrimonious divorce was finalized in 2020.

Four western Balkan countries are officially candidates for membership, but have been in the EU’s waiting room for several years.

“We are one European family… and I’m deeply convinced we share the same destiny,” European Commission President Ursula von der Leyen told them in October.

Turkey, a candidate since 1999, finally launched membership negotiations in 2005.

But its relationship with the EU degenerated from 2013 and has never recovered from a harsh crackdown by President Recep Tayyip Erdogan on his opponents after a failed coup in 2016.

Two other members of the former Yugoslavia — Bosnia and Kosovo — are considered as potential candidates, but do not yet meet the EU’s criteria for membership.

Brussels launched an Eastern Partnership with a raft of former Soviet republics in 2009 including Armenia, Azerbaijan, Belarus, Georgia, Moldova and Ukraine.

It held out closer economic and political relations in exchange for reforms.

Some of these countries, notably Ukraine and Georgia, consider the accords as a stepping stone to full membership, but have been offered no guarantees by EU leaders.

Ukrainian President Volodymyr Zelensky asked for “immediate” membership of the EU on Monday.

However, EU membership is a long and complicated process, and negotiations generally take several years.

While it took just four years to admit Finland, the three Baltic ex-Soviet republics went through nine years of talks and reforms.

The first step to membership is being recognised as a candidate country. Then lengthy negotiations start, during which it has to prove that it meets the EU’s democratic, economic and political standards.