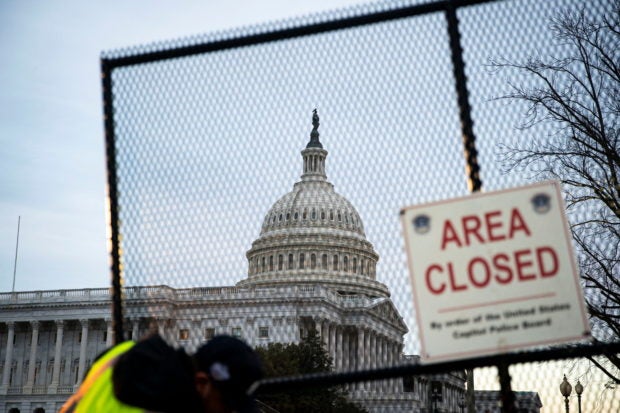 The U.S. Capitol, seen behind newly installed security fencing ahead of the upcoming State of the Union with U.S. President Joe Biden, in Washington, U.S., February 27, 2022. (REUTERS)

WASHINGTON  – Federal authorities are reinstalling fencing around the U.S. Capitol as Washington prepares for planned trucker protests inspired by demonstrations in Canada against COVID-19 pandemic-related restrictions, police said on Sunday.

Authorities were taking the step to protect President Joe Biden’s State of the Union speech scheduled for Tuesday and to “prevent any disruption to the important work of Congress,” U.S. Capitol Police Chief Tom Manger said.

The fencing was previously installed after supporters of former President Donald Trump rampaged through the Capitol on Jan. 6, 2021, in a failed effort to block Congress from formally certifying his 2020 election loss to Biden. It was removed last July.

A group of American truckers began a cross-country trip from California to Washington last week, inspired by Canadian protests against COVID-19 restrictions that paralyzed Ottawa for three weeks.

More than two dozen 18-wheeler trucks, along with about 50 pickups and recreational vehicles, left Adelanto, California, about 80 miles (130 km) northeast of Los Angeles, last Wednesday. This self-styled “People’s Convoy” is bound for the Beltway, a major highway encircling the U.S. capital, to demand an end to COVID-19 vaccine and mask requirements.

The Pentagon previously said it approved hundreds of National Guard troops and tactical vehicles to help at traffic posts in light of the protest.