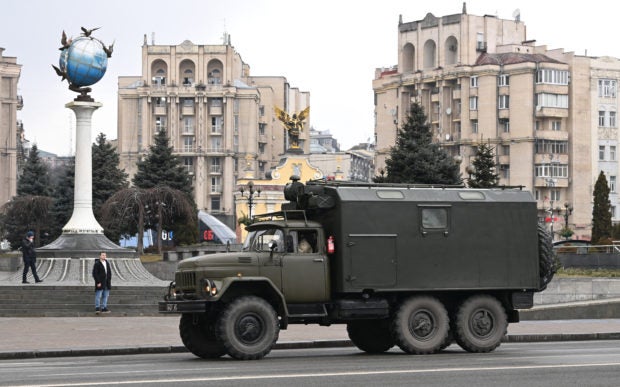 A military cargo truck is pictured in central Kyiv in the morning on February 24, 2022.
Air raid sirens rang out in downtown Kyiv today as cities across Ukraine were hit with what Ukrainian officials said were Russian missile strikes and artillery. AFP

MOSCOW — The Russian army said Thursday that Moscow-backed separatist forces in eastern Ukraine were advancing and had gained territory after the Kremlin launched an attack on the country.

He added that Russia had “high precision weapons” and that Ukrainian civilians had “nothing to fear.”

Konashenkov said the Russia-backed rebel troops are “now fighting and inflicting … damage on the enemy.”

Russian President Vladimir Putin announced he was launching an offensive on Ukraine in the early hours of Thursday.

He did so after recognizing the two rebel republics in eastern Ukraine and signing friendship treaties with them.

Ukrainians wake up to sounds of bombings as war hits home