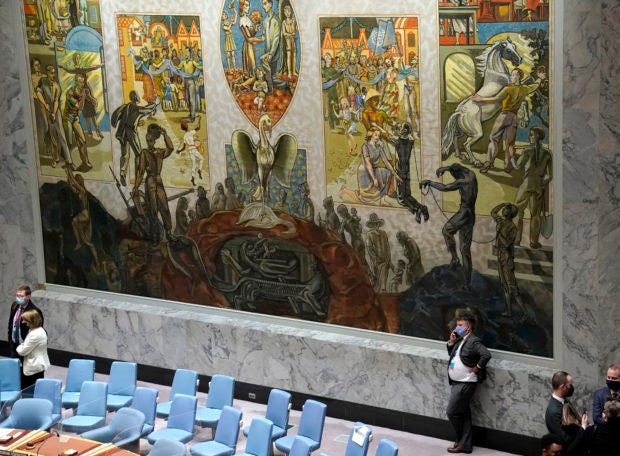 Ukraine Permanent Representative to the United Nations Sergiy Kyslytsya speaks on the phone after an emergency meeting of the UN Security Council on Ukraine in New York on February 23, 2022. AFP

Sergiy Kyslytsya implored the council, chaired by Russia, to “do everything possible to stop the war” against his country.

“It is the responsibility of these bodies to stop the war,” Kyslytsya told the meeting of the 15-member council, which began shortly after Russian President Vladimir Putin announced a military operation in Ukraine.

Kyslytsya told Nebenzia to “relinquish your duties as chair.”

“There is no purgatory for war criminals. They go straight to hell, ambassador.”

In a series of heated exchanges, Nebenzia said Russia was merely carrying out “a special military operation.”

“This isn’t called a war,” he told his Ukrainian counterpart.

Nebenzia later added: “I wanted to say in conclusion that we aren’t being aggressive against the Ukrainian people but against the junta that is in power in Kyiv.”

After the meeting, Kyslytsya described the Moscow envoy’s comments that Russia’s incursion wasn’t a war “lunacy.”

“You want me to dissect the crazy lunatic semantics of a person whose president violates the charter, whose president declared a war and he’s playing with words,” Kyslytsya said in response to a question by a reporter.

Explainer: Can the UN do more than just talk about Russia, Ukraine crisis?