Orphan crisis in PH: ‘A situation worth crying over’ 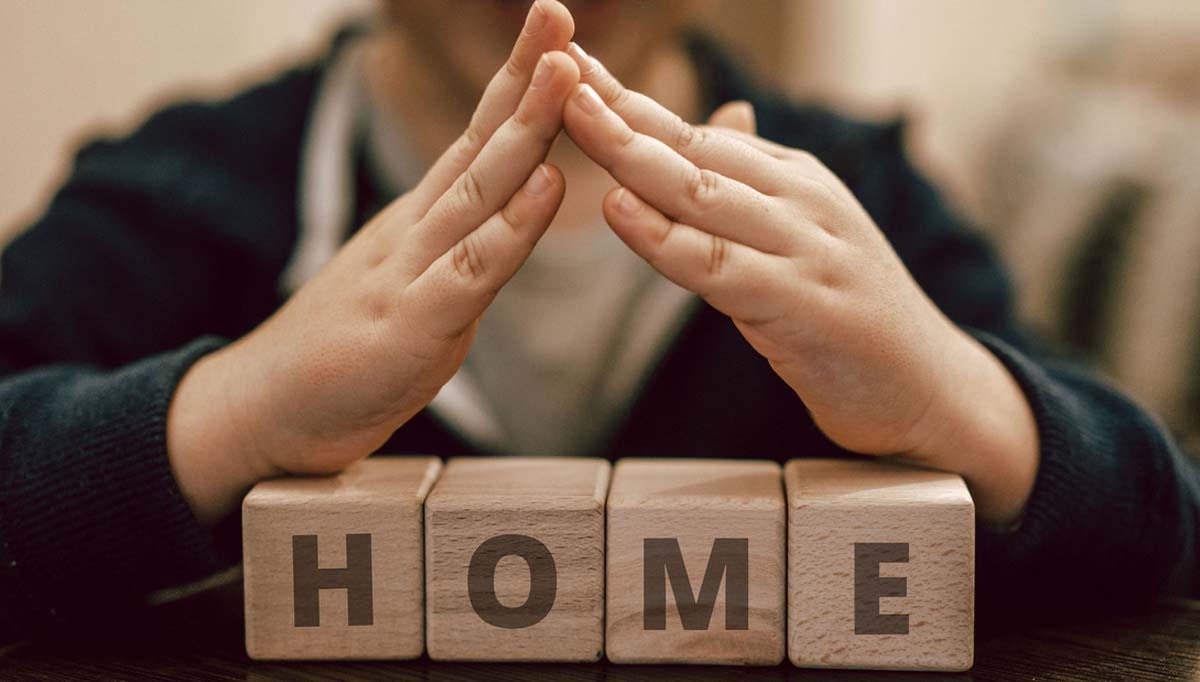 MANILA, Philippines—The Philippine population was expected to reach 109,991,095 at the end of 2021. Among these were children, who were abandoned and still looking for their forever families.

According to data from the Philippines Orphanage Foundation, out of the over 109 million population in the country, there were at least 2 million orphaned children.

Moreover, there was an average of only 139 Filipino orphan children adopted per year from 2014 to 2018. 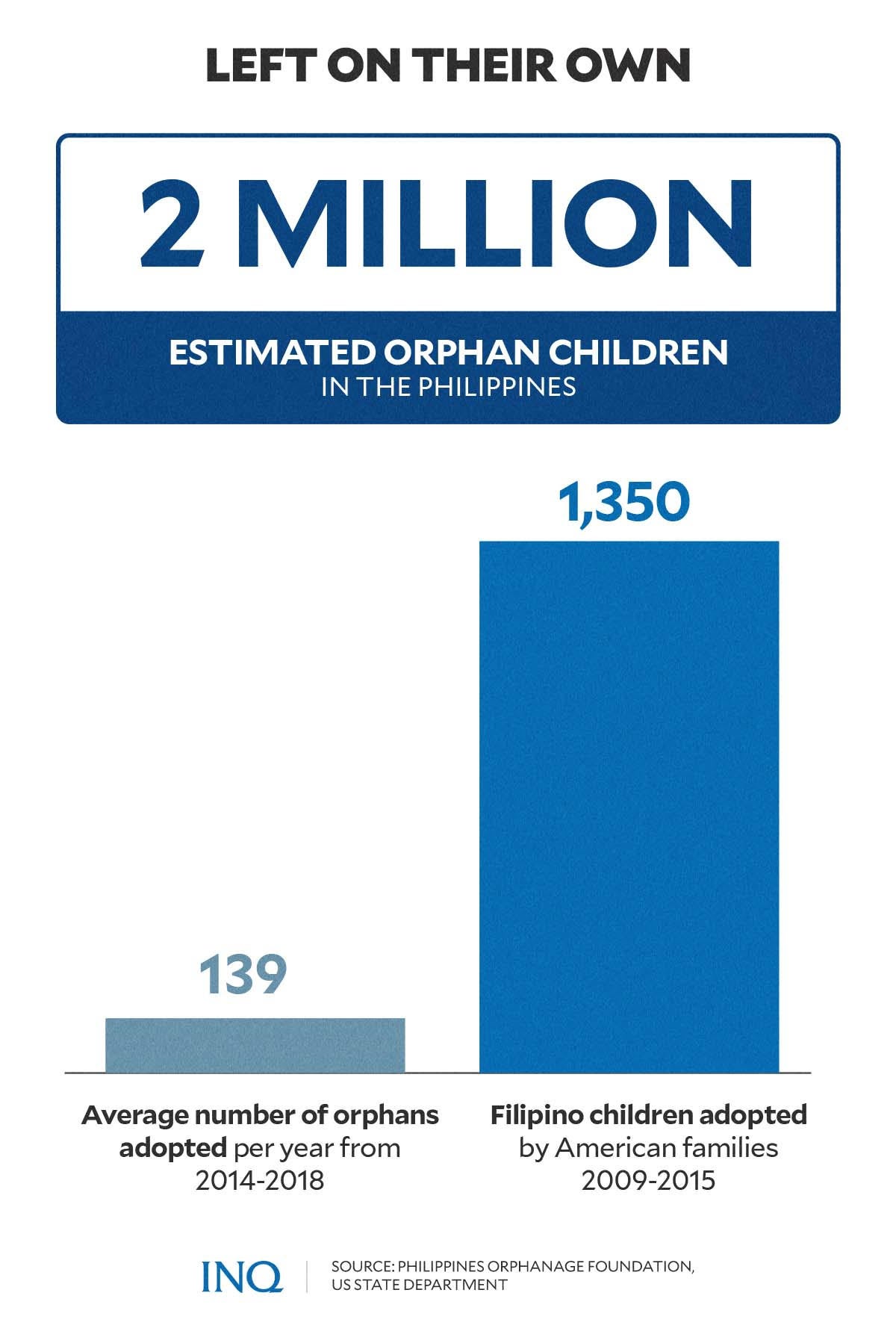 “That is only 0.0000695% of the orphan population that finds a forever-home each year,” the foundation said.

Data from the US State Department showed that between 2009-2015, there were 1,350 Filipino children adopted by American Families.

Why are there many orphans in PH?

One of the four factors cited by the foundation was natural disasters—such as earthquakes, volcanic eruptions, typhoons, floods, droughts, and landslides—which occur in the country throughout the year.

The Philippines, according to a study published on the Tropical Cyclone Research and Review journal by the ESCAP/WMO Typhoon Committee (TC) and the Shanghai Typhoon Institute of the China Meteorology Administration (STI/CMA), is in fact “one of the world’s natural hazard hot spots” and faces “more natural hazards” than other countries.

Every year, an average of 20 tropical cyclones enter the Philippine area of responsibility.

Natural disasters have affected millions of individuals in the country during the past years. Among them are the children—some of whom lose parents or family members when disasters strike.

“Such drastic storms destroy homes, villages, and families. Often the survivors are the children, minus their parents,” the foundation said.

“Natural disasters routinely give birth to orphans,” it added

Executive Order No. 141 signed last year by President Rodrigo Duterte cited figures from the Philippine Statistics Authority, which showed that there were 183,967 live births in 2018 and 180,916 in 2019 among teenagers.

During the pandemic, PopCom warned that more teenagers might get pregnant as lockdowns forced them to stay at home and spend more time with their partners.

When the data came out, authorities were more alarmed: PopCom said that pregnancy among girls aged below 15 increased by 7 percent in 2019.

“These young girls are almost completely unprepared for motherhood and often have no place to turn except to give up the baby they just nurtured for nine months,” said the foundation.

“This is a situation worth crying over,” it added.

The foundation likewise pointed out poverty as one of the reasons for the continuing increase in the number of Filipino orphans.

“[T]here is a never-ending cycle of poverty that leads to parents having to give up their children in hopes they will have a better life somewhere else,” the foundation noted.

“There is little doubt that poverty creates a culture for the creation of orphans,” it added 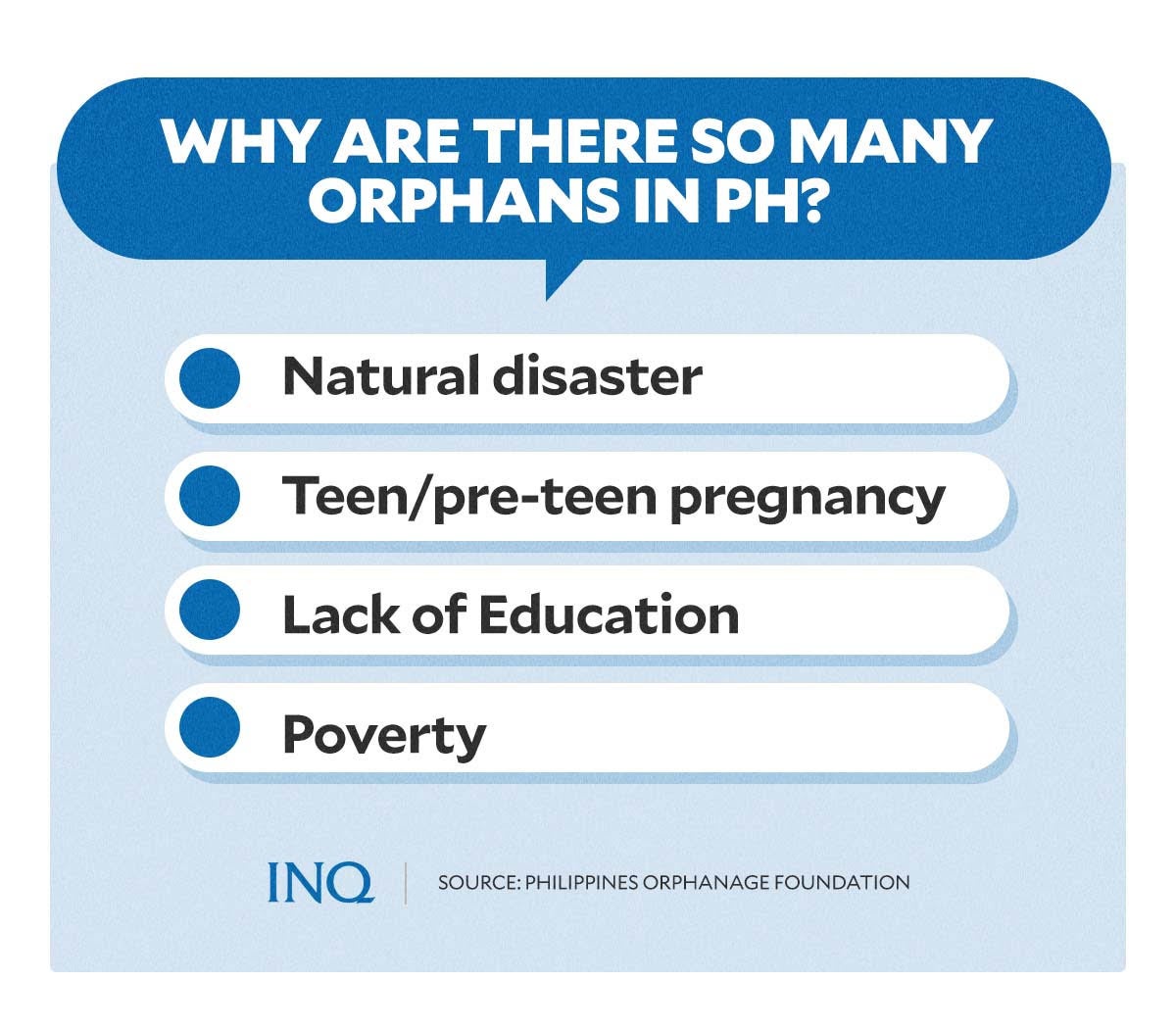 Filipino citizens are allowed to adopt Filipino children, who are below 18 years of age, under Republic Act (RA) No. 8552.

Meanwhile, foreign citizens or families are allowed to adopt Filipino children, who are below 15 years of age, under RA 8043. 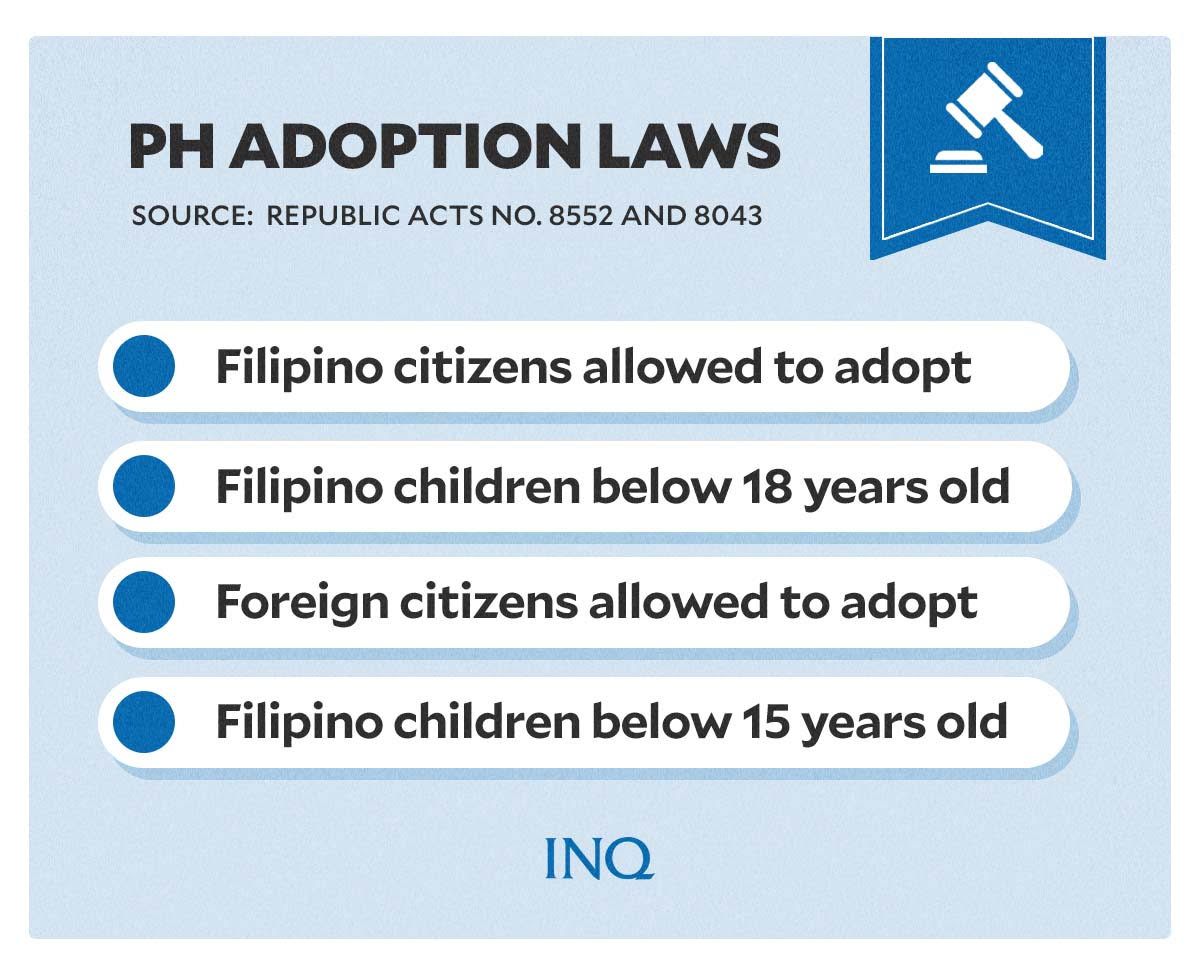 But who exactly may adopt in the country?

According to Philippine laws, individuals or couples must be of legal age or at least 16 years older than the adoptee, and must have the following qualification:

Foreign adoptees, on the other hand, must possess the same qualities required for Filipino adopters. However, foreign individuals or couples must be from countries that have diplomatic relations with the Philippine government.

Moreover, adopters of other nationalities will be qualified to adopt, in compliance with the following qualification:

The qualifications for foreign adopters may be waived if:

A widespread public misconception which prevents members of the lesbian, gay, bisexual, and transgender (LGBT) community to adopt children has been going around, according to Anakalusugan Rep. Michael Defensor.

According to those misconceptions, only a husband and wife may adopt a child.

Defensor, who is also the vice-chairperson of the House committee on the welfare of children, clarified that LGBT Filipinos are allowed to legally adopt children in the country, based on existing laws.

“We must stress that under the law, the right to adopt a child is granted to individuals, and not to couples,” the lawmaker said.

“Our adoption law does not discriminate against LGBT individuals who may wish to adopt children who are legally available for adoption,” he added.

Defensor likewise urged citizens, regardless of their gender, to adopt abandoned and neglected children to help them enjoy living conditions conducive to their full development.

“We would also prefer domestic over foreign adoption to preserve the child’s identity and culture here at home,” he emphasized.

RELATED STORY:
Aging out: The fate of abandoned Filipino children who don’t get adopted