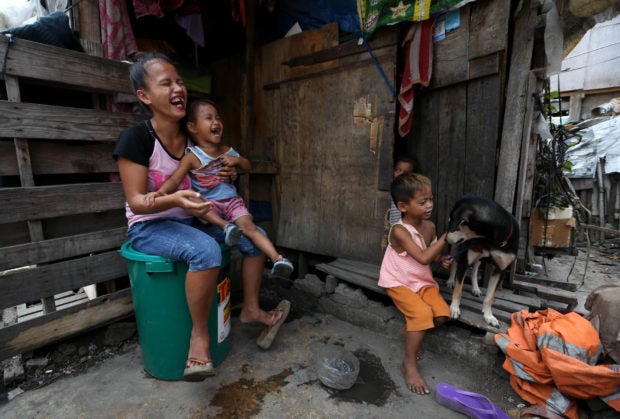 MOTHERINGYOUNG Josephine Torralba, 24, enjoys time with her three children at their shanty in Binondo, Manila. She says she had her eldest child when she was 17, two years after she miscarried. The Commission on Population and Development is alarmed at rising child pregnancies with the number of births given by 15-year-olds and younger going up 7 percent in 2019 from the previous year. —LYN RILLON

MANILA, Philippines — Two 10-year-olds were reported to be the youngest of at least 62,500 adolescents who became very young mothers in 2019, a finding that has alarmed population monitors who believe that lockdowns and other pandemic restrictions might exacerbate child pregnancies in the country.

One of the girls gave birth in Metro Manila and the other in Calabarzon (Cavite, Laguna, Batangas, Rizal and Quezon), the two regions with the highest numbers of teenage pregnancies, the Commission on Population and Development (Popcom) said in a statement early this week.

The Metro Manila girl was one of 345 aged 14 years old and younger who gave birth in 2019, according to civil registry statistics of the Philippine Statistics Authority (PSA). That number slightly went down from 369 in 2018.

Popcom regional director Lydio Español Jr. said that while figures in Metro Manila declined, the case of a 10-year-old giving birth should “sound the alarm for all local government units to harmonize their efforts for stronger and better initiatives on adolescent reproductive health.”

“The pandemic has not only worsened the difficulty of [getting] prenatal and other maternal services but also family planning services that is very crucial in mitigating cases of early pregnancies,” Español said.

But the Akbayan party list group said sounding the alarm “on a recurring issue is merely noisemaking, not policymaking.”

In a statement, the group said there was “no excuse for [the] government to act paralyzed over an epidemic they should have been acting on for the longest time.”

The government was “fully capable of addressing this potential epidemic of teenage pregnancies” through the reproductive health (RH) law, to conduct information campaigns, mobilize resources and make services and supplies accessible to the youth, Akbayan said.

Citing national data from the PSA, Popcom said the number of adolescent girls 15 years old or younger who gave birth in 2019 rose by 7 percent from the previous year.

“As a national and social emergency, the spread of teenage pregnancy across the archipelago still persists at an alarming rate,” said Popcom executive director Juan Antonio Perez III.

“This requires more than a whole-of-government approach. Thus we are calling on the private sector, [local governments], development partners and relevant government agencies to collaborate closely with us in arresting this social menace grappling our youth,” Perez said.

Popcom observed that since 2011, cases of early pregnancies had been increasing steadily among very young adolescents.

While the number was lower compared with that in 2019, PCW pointed out that victims of abuse might have had fewer chances of being rescued because of pandemic restrictions, such as children being banned from leaving their homes. This would limit opportunities to report to the authorities.

A total of 2,678 cases of child rights violations were also reported from March 1 to May 15 and 1,384 from May 16 to June by the Philippine National Police-Crime Information Reporting and Analysis System and Women and Children Protection Center. These involved rape, acts of lasciviousness, and child abuse and exploitation.

The Department of the Interior and Local Government said villages nationwide received a daily average report of 24 cases of physical, sexual, psychological, emotional abuse, neglect and other types of violence from children.

According to the University of the Philippines’ Population Institute and the United Nations Population Fund, teenage pregnancies in the country may increase by 18,000 due to a lack of services during lockdowns.

The unmet need for family planning may also go up to 2.07 million by the end of 2020, a whopping 67 percent increase from 2019. This is the number of women who do not want to have any more children or who desire to space their pregnancies but could not avail themselves of permanent or temporary contraception.

“If the increase of the teenage pregnancies cases will not be resolved, it will add more burden to our health-care system, our economy and in the long run, our plans for the next generation,” said Sen. Risa Hontiveros, author of Senate Bill No. 1334, or the prevention of adolescent pregnancy bill.

Rep. Maria Lourdes Acosta-Alba said teenage pregnancy “takes away the future of our young girls and restricts them to reach their full potential and make decisions that affect their own lives.”

“Challenges like this are made more stark in times of crisis like the present pandemic,” said Alba, author of House Bill No. 6528, the counterpart bill at the House of Representatives.

—With reports from Julie M. Aurelio and Inquirer Research