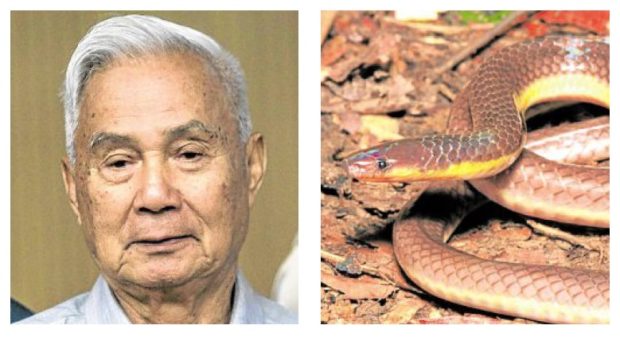 ALCALA’S SNAKE Scientists have honored National Scientist Angel Alcala (left) for his contributions to the study of amphibians and reptiles, and biodiversity conservation in the Philippines by naming after him a new species of reed snake (right) discovered in Mindoro. —INQUIRER FILE PHOTO/CONTRIBUTED PHOTO

MANILA, Philippines — A new species of reed snake discovered in Mindoro was named after National Scientist Angel Alcala in honor of his contributions to the study of amphibians and reptiles in the Philippines, and his work in promoting the conservation of the country’s rich biodiversity.

Scientists from University of Kansas and California Academy of Sciences described the snake, Calamaria alcalai, in their article that was recently published in the Philippine Journal of Systematic Biology.

They said the species name was in recognition of Alcala’s “numerous contributions on the systematics, biogeography and ecology of amphibians and reptiles in the Philippines—and in general, for his influential promotion of conservation and sustainable management of the archipelago’s terrestrial and marine biodiversity.”

Alcala was named national scientist in 2014 in recognition of his research on Philippine amphibians and reptiles and on marine biodiversity. From 1992 to 1995, he served as head of the Department of Environment and Natural Resources, and later became the first chair of the Commission on Higher Education.

His work has led to the discovery of 50 species of amphibians and reptiles, more than 10 percent of some 400 known species in the country.

The new reed snake is the second known Calamaria species on Mindoro Island and the eighth in the Philippines.

According to the scientists, Alcala’s reed snake is small, measuring only 374 millimeters or roughly 14 inches. It has shiny scales all over the body, a relatively longer tail and more subcaudal (under the tail) scales than other Calamaria species.

While most reed snakes spend their time burrowing in the forest floor, the scientists said the relatively long tail of the Calamaria alcalai suggested that it might not be tunneling as much as the other species in its family.

“Nothing else is known about the natural history of the new species, but other Calamaria are exclusively worm-eaters,” the scientists said.

Among the other reed snakes, the newly discovered species was most similar to the Calamaria schlegeli, scientists noted. But since the alcalai is known to be only from Mindoro and the schlegeli is widespread throughout Borneo, Indonesia, Malaysia, Thailand and Singapore, the researchers said a related yet still undiscovered lineage of these snakes might be found in Palawan province.

In their article, the scientists—Jeffrey Weinell, Alan Leviton and Rafe Brown—said the snakes they studied were collected in a primary dipterocarp forest and were likely nocturnal.

They are currently known to inhabit two nearby forested sites in Sablayan town, Occidental Mindoro province, suggesting they could be endemic in the area, they said.

“We anticipate that the new species will remain a Mindoro endemic, but if proper faunal inventory efforts on Mindoro are ever forthcoming, it will be interesting to determine if the new species’ distribution extends to the eastern half of the island, beyond the central mountain range that bisects this island from north to south,” they said.