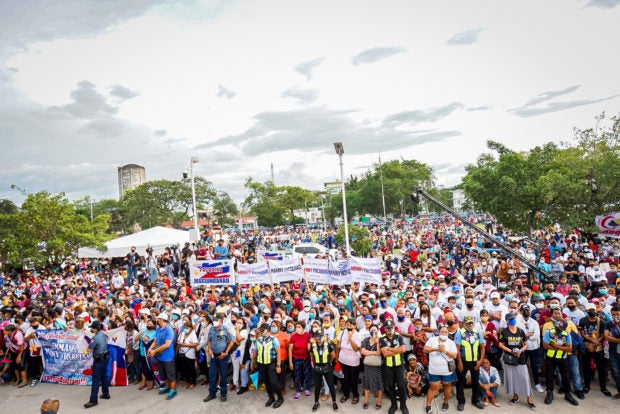 Pacquiao also committed to arresting corrupt government officials, big or small, and he haul them off to jail.

Before his miting de avance at the General Santos Oval Plaza, Pacquiao held a caravan that started in Brgy. Bawing and traversed through Brgys. Tambler, Calumpang, Labanagol, Silway, Dadiangas West and Bula.

Addressing thousands of supporters apart from those in various areas all over the country who attended his kick-off rally through Zoom, Pacquiao reiterated that he is running for president because he is on a mission to uplift the country from the mires of poverty, corruption, and hopelessness.

Speaking in Visayan, Pacquiao said his decision to seek the country’s highest office was prompted by his long years of disappointment on how the country was run and managed by previous leaders. He is also determined to disprove critics that he is incapable of running the country.

Pacquiao said that he decided to hold his miting de avance in General Santos City because this is also where his career took off as a young amateur boxer. He related that the city’s amateur boxing team turned him down so he decided to join the adjoining Davao del Sur Team where he soon emerged as the champion in his weight class.

Pacquiao said that contrary to what his critics claim that he is not yet ripe to seek the presidency, his life experience as one who came from the depths of poverty and one who has seen the face of the systemic corruption when he entered public service gives him the clearest understanding on how to solve the country’s woes.

Also visible during the event are singer Freddie Aguilar and Annabelle Rama.

Pacquiao’s running mate Deputy Speaker Lito Atienza sprained his legs and was not able to join in the kick-off rally. He however delivered his message of support for Pacquiao through Zoom.

The other adopted senatorial candidates of Pacquiao including re-electionist Sen. Dick Gordon and Congresswoman Loren Legarda also delivered their message through Zoom. Also present during Pacquiao’s opening salvo are his parents Rosalio and Dionisia Pacquiao, who is also known as Mommy D, his wife Jinkee, and the other members of his family.

Pacquiao believes he has support of Visayans: Kami-kami lang magtutulungan