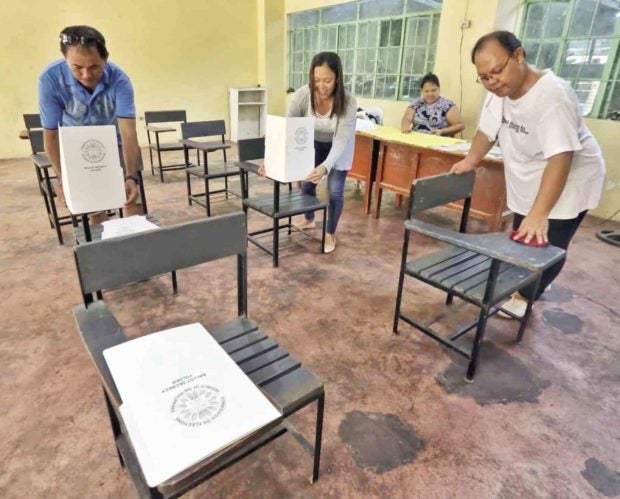 FILE PHOTO: Teachers prepare the election paraphernalia they received from the Cebu City treasurer’s office and the classroom to be used as a voting precinct for the 2019 midterm elections. (File photo by JUNJIE MENDOZA / Philippine Daily Inquirer)

MANILA, Philippines — A coalition of international rights groups has launched a global observer mission in the country to monitor this year’s elections, in a bid to push for clean and honest elections amid what they called a decaying rule of law in the country.

Peter Murphy, chair of the ICHRP, said their goal was to monitor the Philippine elections, seen as a crucial battle that will determine, among others, the fate of President Duterte who is being investigated by the International Criminal Court for alleged crimes against humanity.

The ICHRP is one of the many rights groups that have long sounded the alarm over the Philippines’ deteriorating rule of law as Mr. Duterte waged his twin wars on drugs and dissent.

“The 2022 elections in the Philippines are important in defending whatever remains of our democracy,” said Danilo Arao, convenor of Kontra Daya.

Essentially, the IOM will send teams nationwide throughout the campaign and post-campaign. They will be asked to gather evidence and document the entire election season, and to issue reports throughout the next three months.