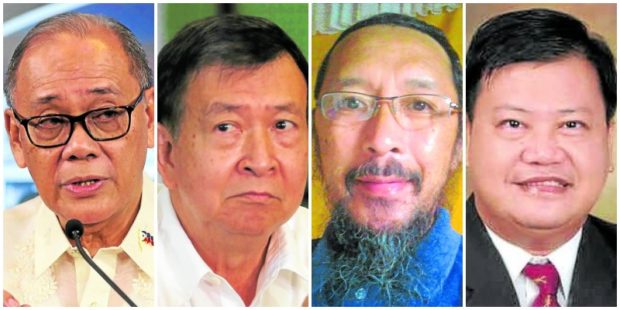 MANILA, Philippines — They also made the cut and will be on the official ballot for the presidential race.

So far, however, the breadth and consistency of their public engagements have yet to match the better-oiled campaigns of their rivals. But with three more months to go before election day, the disparity can still change, their messages might be better delivered and amplified.

Ernesto “Ernie” Abella, a former spokesperson for President Rodrigo Duterte, resigned from his post as foreign undersecretary when he filed his certificate of candidacy (COC) for president. Listed as an independent candidate, he has adopted the campaign “Bagong Pilipino, Bagong Pilipinas.”

On his Facebook page, he names three pillars of his platform: a fair society, a government that is felt by the people, and a strong nation. A former pastor and an educator by profession, he espouses what he called the rebalancing of social relationships in government, business and civil society. In an online interview with other presidential aspirants for EuroTV, Abella said: “We need to rebalance the power in governance so ordinary people are not ignored.”

Civil society should be allowed and encouraged to participate in the affairs of the government, he added.

Abella also pushed for the creation of job opportunities by “maintaining our BPOs… and manufacturing industries while also opening our neglected agro industry.”

He is also advocating a shift to the parliamentary system. “When you have autonomous regions, they will have their own assemblies so you will really be able to filter the people already. So the parliamentary system that I’m thinking about will really have to be consulted with the experts so we can shift, though I don’t know yet if it will be a hybrid one or a full parliamentary system. The most important thing here are the people making the laws—those who push for the common good and are really smart.” Gonzales is running under Partido Demokratiko Sosyalista ng Pilipinas (PDSP), where he is currently the chair.

Faisal Mangondato, a businessman from Lanao del Sur, made an unsuccesful bid for a Senate seat in 2019.

This time, he’s gunning for the presidency because “for more than 50 years, those who were elected by the people always promised for better lives for the Filipinos. But the result has been the same and people are still poor.”

Mangondato envisions a federalist government and believes the country can be run by a transition government for three years before completing the shift. He also said in an online interview that he plans to put the government on “autopilot,” with civil service professionals running their respective departments based on beneficial programs while also introducing improvements.Mangandato is running under the party Katipunan ng Kamalayang Kayumanggi (KTPNAN).

Dr. Jose Montemayor Jr., a cardiologist, has vowed to “eliminate corruption, criminality and COVID.” He stressed that the president should be knowledgeable about the coronavirus and its impacts on public health and the economy.”

“Our country is facing a very serious crisis, especially in the pandemic. One who is running for president must have ample knowledge of what this virus is and (its) effects, not only on the health condition of our country but also on the economic side. I am also an economist aside from being a doctor and a lawyer,” he told reporters in an interview after filing his COC.

“Our people are desperately looking for a leader, one who is knowledgeable, honest, and with integrity, and also one they will have confidence in,” he added.

In an online interview, he said the country does not only have a corrupt government but also a corrupt justice system. “The effect of corruption is worse than the effect of a murder. Thousands and thousands are suffering from poverty and unemployment because of the corruption of the few,” he stressed. Running under the Democratic Party of the Philippines, Montemayor said he would conduct his campaign “at the grassroots level, as well as all the professional organizations and Born-again Christians.”