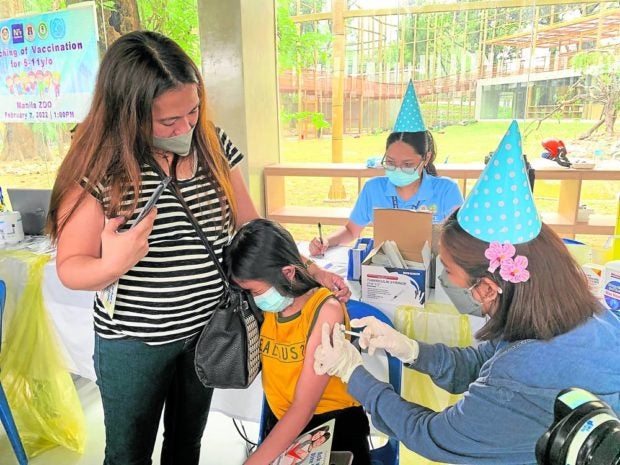 MANILA, Philippines — Marilyn Molina, a street sweeper in Manila, brought her two kids as early as 8 a.m. to the newly rehabilitated Manila Zoo on Monday for the pediatric vaccination of minors aged 5 to 11.

“I brought them with me on my way to work because I thought the inoculation would start early,” she said.

It was only at around 2:40 p.m. when her sons aged 7 and 9 finally received their jabs.

Unlike other kids, Daniel Jeremy and Destiny Bryle did not seem to feel the pain of getting injected with the Pfizer vaccine.

After their immunization, the two kids proceeded to the post-vaccination area where they stayed for another 15 minutes for observation.

They were given free paracetamol and Vitamin C, along with loot bags full of candies and ice cream.

Nina Grace Villanueva, a mother of two, brought her kids to the venue as early as 7 a.m.

Villanueva decided to get her children vaccinated because they are set to move abroad. Meanwhile, Molina said she got her sons immunized in preparation for the upcoming in-person classes.

“[Parents] should not be scared of having their children vaccinated because it’s for their own sake. Whether they get vaccinated or not, they are still at risk of getting sick,” Molina said.

The two families, along with hundreds of people consisting of parents and grandparents, flocked to Manila Zoo on Monday to support their children who availed of the jabs.

Afterwards, they were allowed to explore and tour the newly renovated site and see the animals around.

Manila Mayor Francisco “Isko Moreno” Domagoso said that the pediatric vaccination would soon open at Ospital ng Maynila, malls, schools and health centers, just like how it was implemented in the adult population.

Interior Undersecretary Jonathan Malaya during the launch of pediatric vaccination at Manila Zoo cited a petition asking the Department of Health (DOH) to discontinue the immunization program, due to its “fatal consequences.”

“We beg to disagree with this petition because it has no basis. The fatal consequences are not true because [the pediatric vaccination] is being done in other countries,” he said.

Meanwhile, the DOH has rescinded a portion in its memorandum, which would have enabled the government to dismiss parental consent if a minor child was willing to be vaccinated.

“There was just a misunderstanding. I have tasked the DOH last week to remove that rider provision,” Duque said during the launch of the pediatric vaccination for kids age 5 to 11 at Philippine Children’s Medical Center.

“In case the parent/guardian refuses to give consent to the vaccination despite the desire and willingness of the minor child to have himself/herself vaccinated, or there are no persons that may legally exercise parental authority over the child, the State may act as parens patriae and give the necessary consent … In this regard, the DSWD or its city/municipal counterparts shall serve as the proper office who shall represent the State.”

On Feb. 4, the DOH rescinded that part and amended other provisions. INQ“I think it was the basis for the filing of a petition at the Quezon City RTC (regional trial court) last week,” said Duque, referring the petition filed by two parents, Girlie Samonte and former television reporter Dominic Almelor, seeking to stop the COVID-19 vaccination for kids.