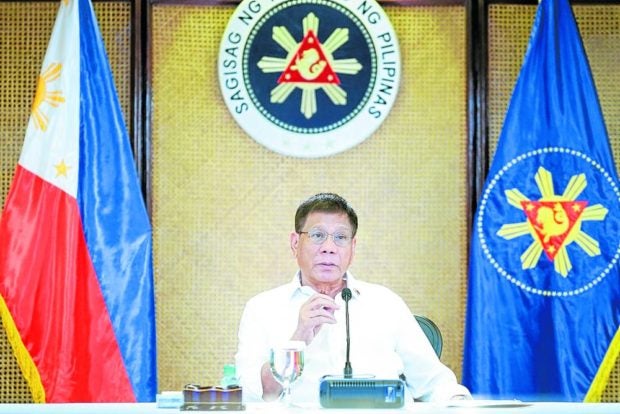 TOP POST: Filipino voters on May 9 will elect the successor of President Duterte, who is ending his six-year term on June 30. —malacaÑang FILE PHOTO

MANILA, Philippines — National candidates will hit the hustings for the official start of the election campaign today, with the son and namesake of the late dictator Ferdinand Marcos leading pre-election surveys in the race for president as he seeks the revival of the family’s political brand.

Marcos Jr., 64, has a formidable running mate in President Rodrigo Duterte’s daughter, Davao City Mayor Sara Duterte, who is also ahead of her rivals in the polls, including Robredo’s running mate, Sen. Francis “Kiko” Pangilinan.

A victory for Marcos Jr. would mark the ultimate political comeback for his controversial family, which was chased into US exile in 1986 after his father’s humiliating ouster by a popular uprising that was then celebrated worldwide as “people power.”

Opponents seeking to block the return of the Marcoses to power have petitioned to have the son thrown out of the race over his conviction for failure to file income tax returns.

He has already beaten one of the challenges, but a key ruling on several disqualification cases has been delayed.

As survey front-runner so far, Marcos Jr. holds a double-digit lead, three months ahead of the May 9 general elections.

His push for the presidency has been aided by what political analysts say has been a decades-long effort to alter the public perception of his family.

Marcos Jr. has tried to defend his father’s rule by claiming economic growth, which economists and historians have disputed — citing the constant power failures during martial law and the diaspora of Filipino workers which began at that time, among other conditions.

Questions over the family’s ill-gotten wealth have become a source of irritation. Saying he would no longer “return to 35-year-old issues,” Marcos Jr. has snubbed a number of televised debates for assorted reasons.

Author and academic Richard Heydarian said, “What we are witnessing right now [in Marcos Jr.’s campaign] is nothing short of a counter-revolution.”

While a comeback for the Marcoses is unthinkable for many Filipinos, over half of the country’s more than 60 million voters are 40 or under, and did not live through the Marcos regime.

Marcos Sr. and his wife Imelda, known for her vast collection of artwork, jewelry, and shoes, were accused of amassing more than $10 billion during their two decades in power.

According to Amnesty International, an estimated 70,000 were imprisoned, 34,000 were tortured and 3,240 were killed after Marcos imposed martial law in 1972.

More than 11,100 victims of human rights abuses were paid compensation using millions from Marcos Swiss bank accounts, part of the family’s ill-gotten wealth so far recovered by the government.

Marcos Jr. has questioned the Amnesty data and rejected long-standing narratives on his father’s rule.

“He had a very clear understanding of what needed to be done and how to do it, and that I think was his best quality as a leader,” Marcos Jr. said of his father in a YouTube interview that has been viewed 13 million times since it aired in September last year. “The problem we have now is we lack leadership,” he said.

Victor Manhit, an analyst with the Stratbase think tank, said: “He [Marcos Jr.] is doing very well because we have this pandemic of disinformation.”

“He has been dominating political discourse in social media,” Manhit added.

But for Raphie Respicio, 48, a tricycle driver and tour guide in the Marcos family’s bailiwick province of Ilocos Norte, no amount of criticism against Marcos Jr. will weaken his support.

“He has done plenty of things here… and he helped tricycle drivers earn a living through tourism,” Respicio said. “We are 100 percent for Bongbong.”

Robredo, 56, has once again become a rival of Marcos Jr. in an electoral contest.

Her volunteer-driven campaign has struck a chord in the public, but her mild-mannered personality is also seen as hurting her own appeal.

“We want a leader who is feisty,” said UP political science professor Jean Encinas Franco.

Still, Robredo’s presidential bid is “a feat in itself because it is the only thing that shows us that democracy is still alive in this country,” Franco said. “[Robredo] symbolizes dissent—by a woman, no less—against an authoritarian-type government.”

“This makes it very hard for [Robredo] to campaign, because people see her as the opposition,” observed Franco.

She said a huge challenge for Robredo is to discourage voters from believing in “quick fixes,” which explain “why Marcos is topping surveys.”

Robredo’s “rhetoric makes it very politically correct, pedantic, technocratic and people do not like that. People want simple answers but people fail to realize that to fully execute reforms, there are no simple answers,” Franco said.

As expected, personality will trump politics for many among the country’s estimated 65 million voters.

“This will be a campaign dominated by personalities and political dynasties, rather than a contest over policies or economic ideologies,” said Eurasia Group analyst Peter Mumford.