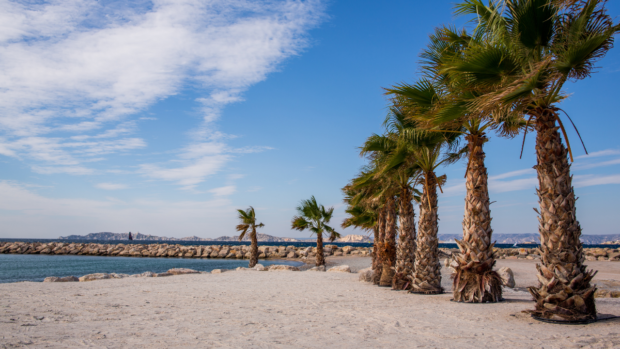 MARSEILLE — French authorities said Monday they would begin testing limited daily permits to visit one of the most pristine coves near the Mediterranean city of Marseille, where summer crowds have sharply increased erosion risks.

The high cliffs and sapphire-blue waters at the Sugiton pebble beach are a main tourist draw for the Calanques National Park, not least because other areas of the forest reserve are often closed due to fire risks.

Some 1,500 people converge at the site each day in the high season, a major environmental strain for an escape just a few minutes’ outside France’s second-largest city.

In recent years people have increasingly trampled down the slope to the beach, instead of taking the path intended to limit damage to vegetation.

“There’s a real erosion risk because there is some soil, not only rock, and the roots of pine trees in particular could be exposed and weakened,” a park spokesman told AFP.

“We could lose the whole landscape if we did nothing,” he said.

To cap the number of visitors at 200 or 300 a day, a free online reservation site will be set up with tests beginning this spring, ahead of implementation from “at least” July 15 to August 15.

Rangers will check permits at the entry to the inlet and also carry out spot checks, in a measure that would be the first of its kind for a French national park.

It is the latest step for authorities struggling against overuse at the environmentally fragile coast.

They have already banned unauthorized boats from mooring at the inlets, drastically reduced parking spots, and begun posting pictures of the crowded beaches on social media to discourage people from coming.