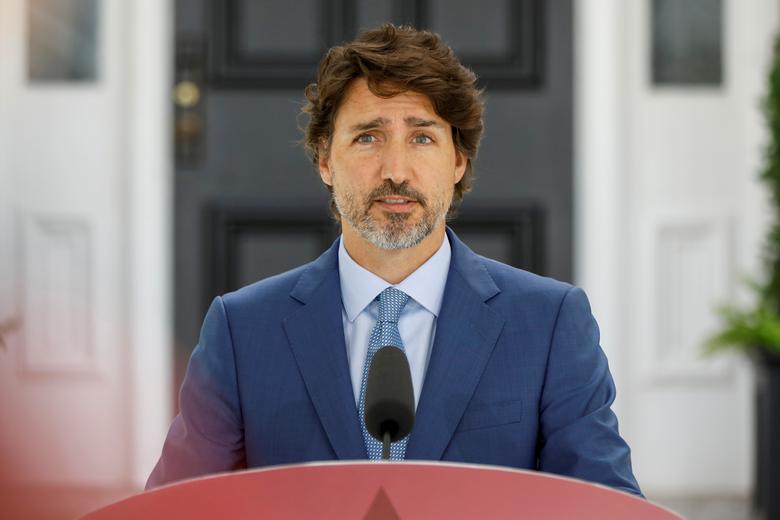 “I feel well and have no symptoms,” the 50-year-old premier told a news conference.

Trudeau had announced last week he was isolating after being exposed to the coronavirus. Two of his three children have also since tested positive, he said.

Trudeau, who received his third dose of the Covid vaccine in January, urged Canadians to get vaccinated and boosted, as the nation battles a rise in cases and hospitalizations due to the Omicron variant.

He will not be physically present for the return of parliament on Monday after a winter break, saying he would be “working remotely this week and keep following public health guidelines.”

Outside parliament, a mass protest led by Canadian truckers opposed to vaccine mandates for crossing the Canada-US border continued for a third day.

The demonstration was much smaller than on the weekend when some 8,000 protestors, according to police, converged on the capital with horns blaring, clogging downtown streets and forcing closures of stores, schools and Covid vaccine clinics.

Trudeau defended the vaccination mandate, noting that 90 percent of drivers are already vaccinated.

“It is not by demonstrating against the pandemic but by getting vaccinated” that Canada will end public health restrictions aimed at slowing the spread of the virus, he said.

The prime minister also condemned the actions of some protestors over the weekend, when demonstrators had propagated racist messages and flown Nazi flags, as well as danced and urinated on the National War Memorial. Some also reportedly forced a local soup kitchen to serve them meals intended for the homeless.

“We are not intimidated by those who hurl insults and abuse at small business workers and steal food from the homeless,” Trudeau said.

“We won’t give in to those who fly racist flags. We won’t cave to those who engage in vandalism or dishonor the memory of our veterans.”

Police have opened several criminal investigations into alleged threats and intimidation by protestors.

On Monday, a truck collided with a police barrier blocking access to the parliamentary precinct.

“There were no injuries and the situation was de-escalated,” a police spokesperson told AFP.

The nation’s most populous province of Ontario, where Trudeau lives in the capital Ottawa, is expected to start easing Covid restrictions from Monday, allowing restaurants, bars, sports venues and movie theaters to re-open.

Canada has recorded more than 2.9 million cases of Covid-19 and more than 33,000 deaths since the start of the pandemic.

Read Next
Lunar New Year flowers in flames as Hong Kong farmer burns unsold stock
EDITORS' PICK
UK’s Boris Johnson will resign, BBC reports
Unemployment rate up to 6% in May
Geek out at TOYCON 2022 powered by Smart Signature
High inflation: Your P1 is now worth only 87 centavos
High-risk pregnancy: Reducing your risk is in your hands
House energy committee chair Arroyo bats for cheap electricity
MOST READ
Suspect in grisly killing of missing woman in Bulacan arrested
Kim Atienza’s daughter flaunts bikini body in response to critics of her ‘revealing photos’
Japanese artist who created ‘Yu-Gi-Oh!’ found dead in the sea
FDA probes popular Filipino noodle brand for ‘high level of ethylene oxide’
Don't miss out on the latest news and information.