Hundreds of mutilated dolphins found on beach in France 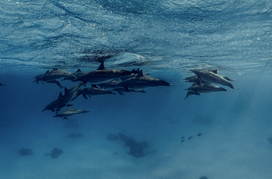 Hundreds of mutilated dolphin corpses were recently found piling up on a beach in France. These dolphin casualties add to the growing number of dolphins that accidentally get killed as bycatches of the fishing industry.

According to the organization, 700 mutilated dolphins had been found ashore since December 2018. Only 20 percent of the dolphin corpses, however, wash up on the beaches, which means it is possible that thousands of dolphins have already been killed.

The fishing industry in the French coastal town is deemed as the cause of the problem since it allows fishermen to trawl without pingers, which are acoustic repellents used to avoid dolphin poaching. Trawlermen had also been documented fishing illegally during a recovery period, according to Sea Shepherd.

The cetaceans had fractures, snapped tails, broken flippers and deep wounds from nets cutting into their bodies, as per Independent. Trawlermen also cut the mammals open in hopes of making them sink and disappear. Some of the bodies, however, get washed up on the shores where they get collected once a week and sent to a rendering plant.

Scientists from the Pélagis Observatory in France warned that dolphins might soon face extinction with the growing number of deaths per year as dolphins reproduce slowly, the Independent stated.

Scientists also said that identifying the responsible fishermen is the first step to improving the situation. However, according to Sea Shepherd, the government, does not require on-board cameras and other identification methods.

“When will the law require this? How long is the government going to let a handful of people block any progress on this issue? How can we explain the fact that fisheries committees have such power and impunity in this country?” said Sea Shepherd France president Lamya Essemlali.

“It has to be said that apart from the declarations of intent issued by press releases every year, the government does not take the problem seriously and is mainly concerned about protecting the needs of fishermen,” Essemlali stressed.

The accidental catches continue to pose a threat to the survival of the dolphin species. Sea Shepherd reports that about 10,000 dolphins are accidentally caught and killed each year. This adds up to the number of mass dolphin deaths caused by commercial activities, which include the controversial Taiji dolphin drive hunt in Japan which legally allows hunters to slaughter 2,000 dolphins annually. Casey Eridio/JB