Topless sunbathing going out of fashion in France, says survey 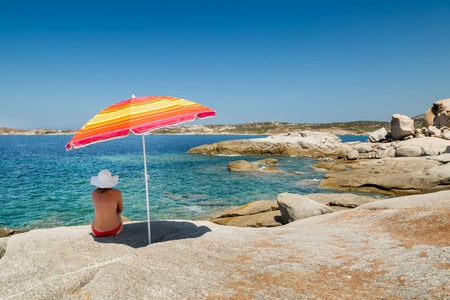 Once widespread in France, topless sunbathing is going out of fashion, a survey has shown, with fears about harassment, body image and health seen as prompting a trend to cover up more at the beach.

Fewer than one in five Frenchwomen under 50 said they sported a “monokini”, compared to 28 percent a decade ago and 43% in 1984, according to the survey by French pollster Ifop published Tuesday.

Young women aged 18 to 25 said harassment, criticism of their bodies and being ogled by men were their biggest barriers to going topless.

And while France may be the country of liberty, equality and fraternity, Frenchwomen are more shy than their European neighbors about stripping off at the beach, compared to Spaniards (48%) and Germans (34%).

But marketing and social media, rather than modesty, are to blame for the decline, said Camille Froidevaux-Metterie, political science professor at Reims university and author of French-language book “Women’s Bodies, the Battle of Intimacy.”

“Women feel that their breasts don’t look good enough, so they hide them,” she told AFP.

“It’s even worse today with social media and influencers. They participate in this commercial system which creates standards to prevent women liking their bodies”.

And while social movements can encourage body positivity, we “still have a long way to go”, she said.

The poll for French site VieHealthy.com asked 5,026 women from France, Italy, Spain, Germany and the United Kingdom about their sunbathing habits in an online survey in April.

While women aged 18 to 25 were most worried about body image and pestering, Frenchwomen as a whole gave risk of sun damage as their biggest incentive to stay covered.

“This can be explained by the success of public health messages about the risks of sun,” Ifop’s Francois Kraus, who led the study, told French daily Le Parisien.

Women’s beach attire is a contentious issue in France, with the heatwave currently stifling the country reigniting a row over the use of full-body Islamic burkini swimsuits.

The burkini has divided France, which is the country with Europe’s largest Muslim population but also has strict secular laws.

Increasing keenness to cover up has its limits, the survey suggests.

In response to the question, “Does it bother you to see a woman in a burkini on the beach?”, 68% of French people said “yes.” JB