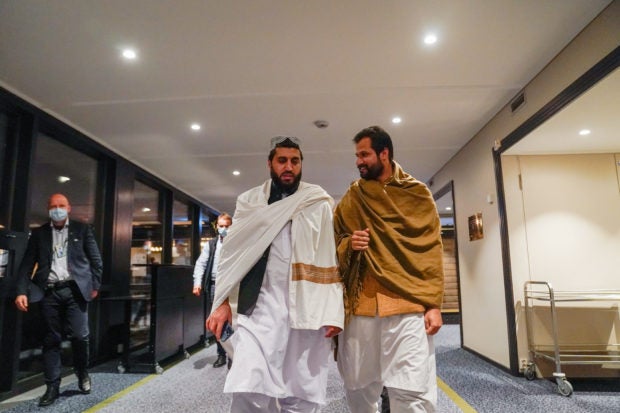 Representatives of the Taliban delegation are seen at the Soria Moria hotel during talks in Oslo, Norway, on January 23, 2022. – The first Taliban delegation to visit Europe since returning to power in Afghanistan began their three-day visit on January 23, 2022 with talks with Afghan civil society members focused on human rights and with women activists. On January 24, 2022, the Taliban will meet representatives from the United States, France, Britain, Germany, Italy and the European Union, while January 25, 2022 it will be dedicated to bilateral talks with Norwegian officials. (Photo by Torstein Bøe / NTB / AFP) / Norway OUT

OSLO — Talks in Oslo Sunday between the Taliban and Afghan civil society members served as an “icebreaker”, on the eve of their meeting with Western diplomats to discuss human rights and the humanitarian crisis in Afghanistan, an Afghan participant said.

The first Taliban delegation to visit Europe since the hardline Islamists returned to power there, led by Foreign Minister Amir Khan Muttaqi, spent the first day of their three-day visit talking with women activists and journalists, among others.

“It was a positive icebreaking meeting,” feminist activist Jamila Afghani told AFP. The negotiators “displayed goodwill… Let’s see what their actions will be, based on their words”, she added.

Taliban spokesman Zabihullah Mujahid, in a tweet, said: “All Afghans need to work together for better political, economic and security outcomes…

“The participants… recognized that understanding and joint cooperation are the only solutions.”

The closed-door discussions, facilitated by Norway, are being held at the Soria Moria Hotel, on a snowy hilltop outside Oslo.

Afghanistan’s humanitarian situation has deteriorated drastically since last August when the Taliban stormed back to power 20 years after being toppled.

International aid came to a halt, worsening the plight of millions of people already suffering from hunger after several severe droughts.

The hardline Islamists were ousted by a US-led coalition in 2001 but took over again following a hasty withdrawal by international forces.

No country has yet recognized the Taliban government, and Norwegian Foreign Minister Anniken Huitfeldt stressed on Friday that the talks would “not represent a legitimization or recognition of the Taliban”, but that country’s humanitarian crisis had to be addressed.

One of them, Shala Sultani, said the talks were tantamount to “laughing in the face” of Afghans who have lost family members. “You do not talk to terrorists,” she said.

On Monday, the Taliban will meet representatives of the United States, France, Britain, Germany, Italy and the European Union. On Tuesday they will talk with Norwegian officials.

Thomas West, the US special representative for Afghanistan, tweeted on Sunday: “As we seek to address humanitarian crisis together with allies, partners, and relief orgs, we will continue clear-eyed diplomacy with the Taliban regarding our concerns and our abiding interest in a stable, rights-respecting and inclusive Afghanistan.”

Joining the delegation from Kabul is Anas Haqqani, a leader of the most feared and violent faction of the Taliban movement –- the Haqqani network, responsible for some of the most devastating attacks in Afghanistan.

He was jailed for several years at the United States’ Bagram detention centre outside the capital Kabul before being released in a prisoner swap in 2019.

International aid financed around 80 percent of the Afghan budget until it was halted in August, and the United States has frozen $9.5 billion in assets in the Afghan central bank.

Unemployment has skyrocketed and civil servants’ salaries have gone unpaid for months.

Hunger now threatens 23 million Afghans, or 55 percent of the population, according to the United Nations, which says it needs $4.4 billion from donor countries this year to address the humanitarian crisis.

“It would be a mistake to submit the people of Afghanistan to a collective punishment just because the de facto authorities are not behaving properly,” UN Secretary General Antonio Guterres said Friday.

The international community is waiting to see how the Taliban intend to govern after being accused of trampling on human rights during their first stint in power between 1996 and 2001.

While the Islamists claim to have modernized, women are still largely excluded from public-sector employment and most secondary schools for girls remain closed.

A former Afghan minister for mines and petrol who now lives in Norway, Nargis Nehan, told AFP she had declined an invitation to take part.

She said she feared the talks would “normalize the Taliban and… strengthen them, while there is no way that they’ll change.”

Two women activists disappeared this week, seized from their homes in Kabul after taking part in a demonstration.

Davood Moradian, the head of the Afghan Institute for Strategic Studies now based outside Afghanistan, criticized Norway’s “celebrity-style” peace initiative.

Hosting the Taliban’s foreign minister “casts doubt on Norway’s global image as a country that cares for women’s rights, when the Taliban has effectively instituted gender apartheid,” he said.

Norway has played a mediating role in many conflicts, including in the Middle East, Sri Lanka and Colombia.