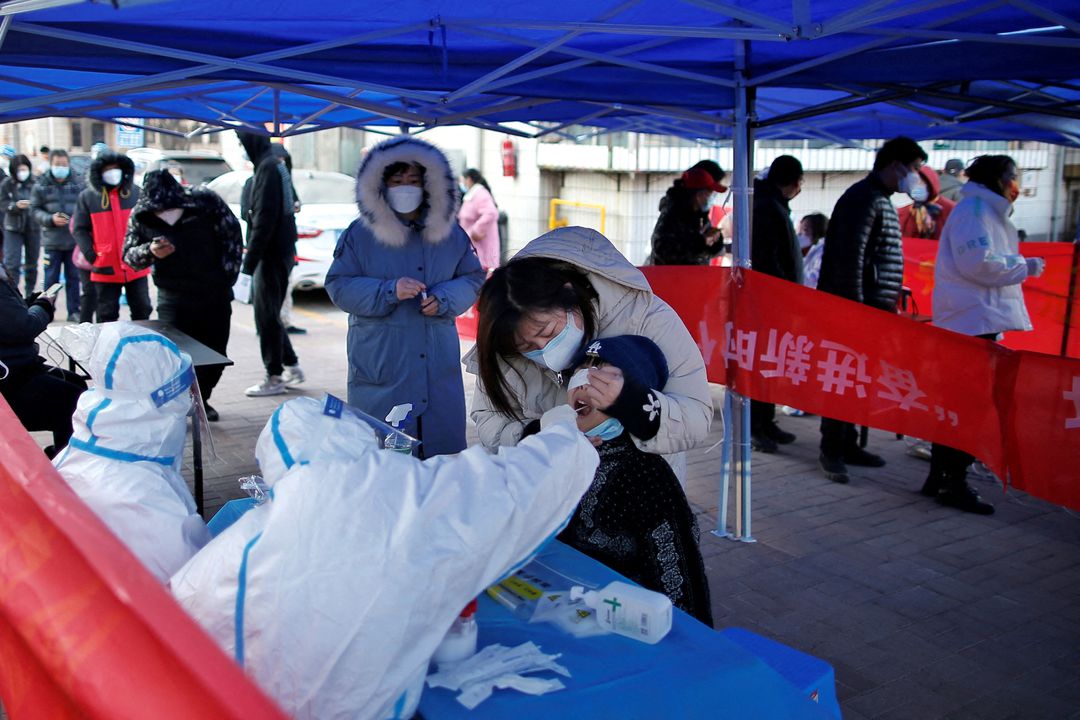 A medical worker in a protective suit collects a swab from a resident for nucleic acid testing at a makeshift testing site for the coronavirus disease (COVID-19), after local cases of the Omicron variant were detected in Tianjin, China January 11, 2022. cnsphoto via REUTERS

BEIJING — The Chinese municipality of Tianjin reported fewer COVID-19 cases on Tuesday as its outbreak showed early signs of easing, while the daily case count in the city of Anyang hit a record.

Tianjin, a key port in the northern China, reported 18 domestically transmitted cases with confirmed symptoms for Monday, the National Health Commission (NHC) data showed on Tuesday. That marks the lowest daily number in a week.

NHC official He Qinghua said on Saturday the risk of the Tianjin outbreak spreading to other areas was gradually declining, as new cases in the past three days were mainly in people who had been quarantined.

Assembly plants for Volkswagen and Toyota in Tianjin remained closed due to the outbreak. The component factory of Volkswagen in the city has resumed some of the shifts since Thursday last week, according to a statement from Volkswagen Group China on Tuesday.

Tianjin reported over 300 local symptomatic cases from the current cluster, which has also spread Omicron infections to two other cities.

Tianjin’s caseload remains smaller than many outbreaks overseas, but it has made it harder for locals to leave town, sealed up higher risk communities and launched multiple rounds of testing among its 14 million residents, under China’s guideline to quickly curb any flare-up as soon as possible.

The capital Beijing city, about to stage the Winter Olympics Games starting Feb. 4, reported one local case with confirmed symptoms for Monday. The infected individual was a close contact of a local Omicron case reported for Jan. 15.

The city of Anyang, which detected Omicron in an outbreak that it said could be traced back to a person arriving from Tianjin, reported 94 local symptomatic cases for Monday, the highest daily count since Jan. 8.

Anyang has stepped up its curbs over the weekend, demanding residents not to leave their communities or villages at will.

China reported a total of 127 local cases with confirmed symptoms for Monday, down from 163 a day earlier.

There were no new deaths for Monday, leaving the death toll at 4,636. As of Jan. 17, mainland China had 105,258 confirmed symptomatic cases, including both local and imported ones.